Laugh At This Old Seflie Of A Scrawny Ezekiel Elliott All You Want, ‘Cause He’s Laughing All The Way To The Bank Now 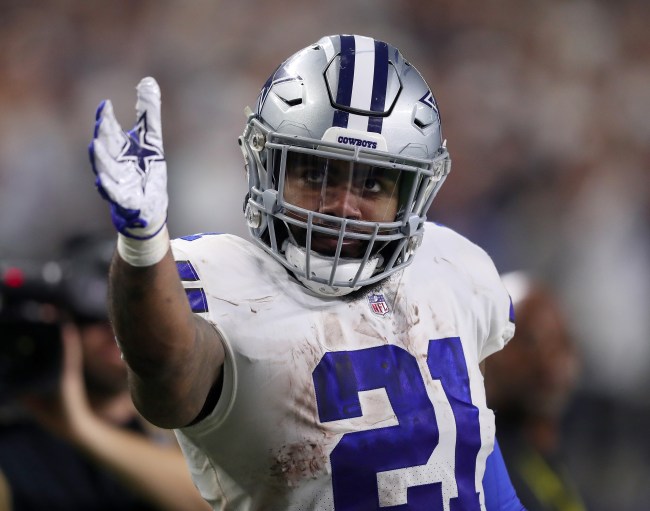 Ezekiel Elliott just got a massive payday. No, really, the Dallas Cowboys All-Pro just inked the most lucrative contract in NFL history for a running back, guaranteeing the former No. 4 overall pick a cool $50 million. Not too bad for a guy who was holding out for a new deal and has had a few unfortunate off-the-field incidents, huh?

While Zeke has the money he was hoping for, it took a helluva lot of time, commitment and hustle to get to where he’s at — which is, presumably, being recognized as the top running back in the NFL. From his days in high school in St. Louis to his college days bulldozing people at Ohio State to, finally, taking over the league as a pro, Ezekiel Elliott has come a long way to reach the pinnacle of his profession.

Need more proof? Well, just take a look at this old selfie that the current Assistant Athletics Director at Ohio State, Mark Pantoni, tweeted out after hearing the news about Elliott’s new deal. The running back literally looks unrecognizable.

Started from the bottom @EzekielElliott ….

Now the highest paid RB in the NFL!

Yep, that’s the guy who many of us took in the first-round for our fantasy teams this year. What a scrawny little dude who clearly had to fill out with years of working out and, you know, that whole puberty thing actually kicking in.

Who knows when this picture of Ezekiel Elliott was actually taken, but, telling by the flip phone, it was probably around 2009 or so — which would put the current star at 14 years old in the photo. Crazy to think that, if it were around that time, Zeke’s gone from prepubescent teen to the highest-paid running back in NFL history in a matter of 10 years. Talk about a transformation.

Big dogs gotta eat, and, even before becoming the stud running back that he is now, Elliott clearly thought of himself as being able to flex on people — even if it came in the privacy of his own bathroom with, you know, zero muscles at all.