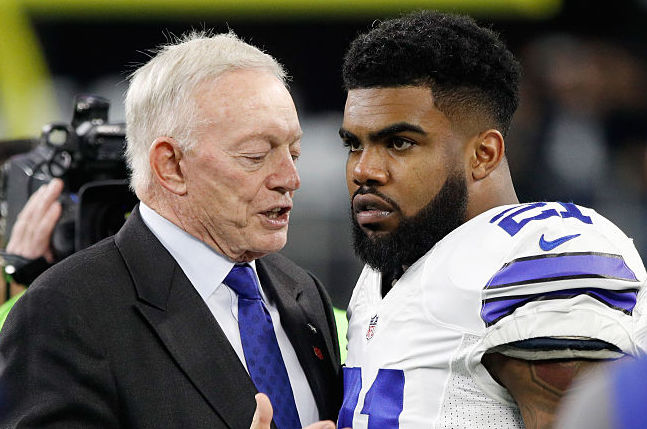 Last month, the Cowboys suffered a major setback when Ezekiel Elliott announced he was prepared to follow in the footsteps of Le’Veon Bell and sit out this year’s NFL season if the team refused to pay him the money he felt he deserved.

Eliott decided to take a trip to Mexico and train by himself in lieu of joining his team to prepare for the upcoming year much to the chagrin of Cowboys owner Jerry Jones, who decided to fire a shot at the running back when he flippantly said “Zeke who?” following one of Dallas’ preseason games.

“We don’t need a rushing champion to win a Super Bowl”
“Zeke who?”

Honestly if you’re Elliot why would you come back to play for this guy for anything less than being the highest paid RB in the game?pic.twitter.com/jlUaBkFxyM

Jones initially appeared optimistic that Elliott would make his grand return by the time Week One rolled around but channeled Harrison Ford in Air Force One when he said he wasn’t willing to negotiate with the superstar and ultimately admitted there was a chance he could end up missing some games.

However, the two parties were finally able to reach an agreement earlier this week when it was revealed Elliott had agreed to sign a six-year, $90 million contract that guarantees him $50 million as long as he can stop getting in trouble off the field.

With that said, it doesn’t seem like Jones and Elliott have the closest relationship.

According to Total Pro Sports, the running back claims he and Jones weren’t on speaking terms during the negotiations, and while he may have been offended by the “Zeke who?” quip, it appears he’s put it behind him.

Ezekiel Elliott said he didn't take anything personally that was said during the contract negotiation process.

When asked about Jerry Jones' "Zeke who?" comment: "That's so far behind us. We signed a deal, so there's really no point of talking about that other stuff."

When you consider Elliott is now the highest-paid running back in the history of the NFL thanks to the Cowboys, I can certainly understand why he’d no longer hold a grudge.