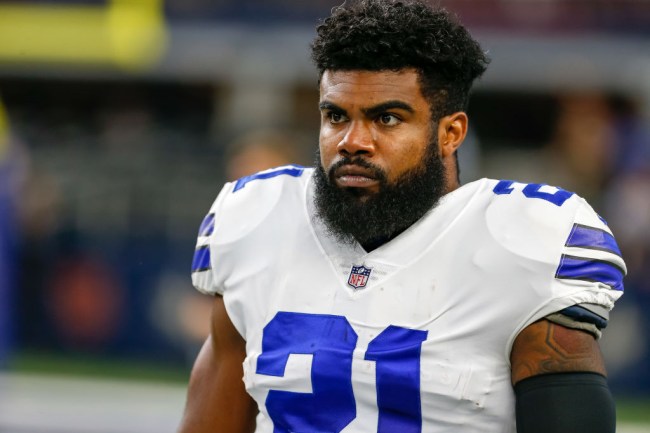 Last month, Ezekiel Elliott decided to pull a Le’Veon Bell when he informed the Cowboys he was willing to sit out the entire season if the team refused to give him a new contract, and after a ton of back-and-forth, he finally got what he was looking for on Wednesday when he signed a monster deal that made him the highest-paid running back in the history of the NFL.

Jerry Jones attempted to play hardball when he said he wasn’t willing to negotiate with Elliott but he ultimately acquiesced, and while only time will tell if he made the right decision, it’s clear he’s optimistic that the running back will continue to deliver on the field for the foreseeable future.

However, Elliott has experienced his fair share of issues off the field stemming back to a domestic incident in 2017 that resulted in him being hit with a six-game suspension and he’s had a hard time staying out of trouble since then.

Back in January, Elliott reportedly tried to fight a DJ at a Las Vegas nightclub, and a few months later, he found himself in trouble in Sin City yet again after shoving a security guard while attending this year’s Electric Daisy Carnival.

The NFL declined to discipline Elliott for either of those incidents but it appears the Cowboys aren’t taking any chances as far as future off-the-field problems are concerned, as Elliott’s new contract reportedly has a clause that would cause him to forfeit a sizeable chunk of cash if he finds himself in hot water yet again.

There are clauses in the Ezekiel Elliott contract that if he gets suspended/has another off-field issue, most of the guaranteed money would void.