Fairfield Baseball Coach Has Insane 48 Hours, Flies Round-Trip To Vermont For His Son’s Wedding While Team Makes History In Texas 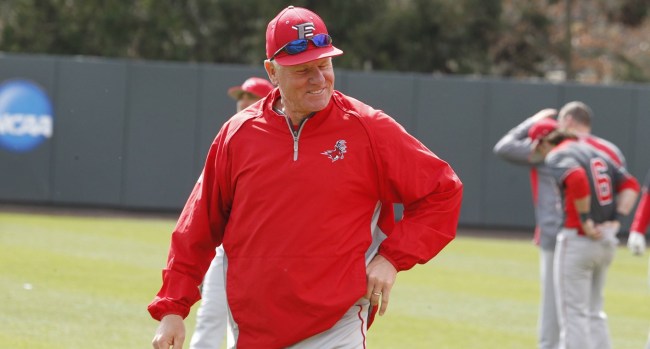 Fairfield University is the most unexpected storyline of college baseball in 2021 and its head coach Bill Currier has had an insane 48 hours. His son got married in Vermont while his team was playing in the NCAA Tournament in Texas. The chaotic, exhausting round-trip ended up being worth it.

A year and weekend to remember.

The Stags began the year 28-0 and finished with a 33-1 record in the conference-only regular season. It was an unprecedented feat in the sport and earned the school the top seed in the Metro Atlantic Athletic Conference tournament.

However, their insane run nearly reached its end after losing to Rider in the championship game. Having never before seen such a strange, impressive record, it was unclear how the NCAA Tournament selection committee would treat a three-loss team from a conference that typically receives one bid.

Deservedly, Fairfield was chosen as an at-large participant and named the three-seed in the Austin Regional. They faced two-seed Arizona State in the opening game and jumped out to a 6-4 lead in the top of the eighth inning. The Sun Devils came back to walk it off in the ninth, but the Stags proved their worth.

Mike Handal leads off the game with his seventh home run of the season!

Here is where things get even more unusual.

Regionals are double elimination. Thus, Fairfield lived to play again in the loser’s bracket. However, Currier could not be there.

Currier’s son was getting married on Saturday night while his team faced four-seed Southern. He wasn’t going to miss such an important day in the life of his family. Not even for a postseason game.

Well, after a three-hour lightning delay, acting head coach Brian Fay led the Stags to their first-ever win in the NCAA Regionals.

Keeping its season alive, Fairfield’s victory set the program up for a Sunday afternoon rematch against Arizona State. First pitch was set for 1:00 p.m. CT and Currier was going to be there, making for an insane 48 hours.

Here is how his weekend played out: (all times CT)

Currier’s chaotic round-trip resulted in a remarkable weekend. While he wasn’t there for his program’s first-ever tournament win, he was there for the second. Less than 24 hours after watching his son at the alter, the Stags upset the 2-seed Sun Devils to advance to the Austin Regional final.

A wild, historic season for a small catholic school from small-town Connecticut continued in the only way possible— with wild history.