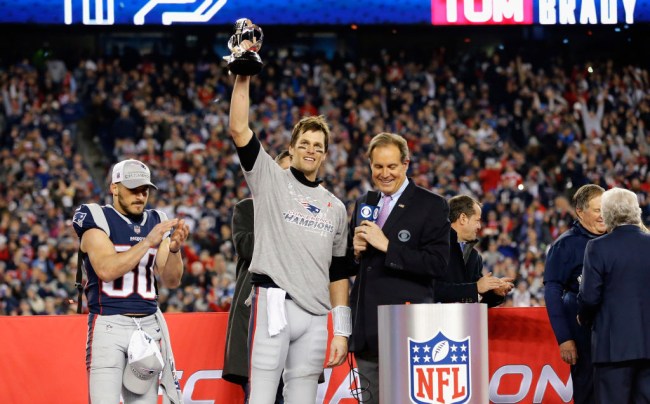 It’s not a good look for a sports league, in this case the NFL, when someone puts together a fake news report in the form of a TV broadcast that says the NFL admits rigging games and it goes viral with a bunch of people actually believing that it’s real. Unbelievably, that is where we, and the NFL, stand today because that actually just happened.

NFL fans were already in full conspiracy theory mode after the Patriots managed to squeak out a win over the Jaguars on Sunday to reach their 10th Super Bowl. This new video just served to stoke those fires even more because, despite it being completely silly, people really want to believe.

The video, which as of this writing, has been viewed over 16 million times on Facebook and shared over 470,000 times, carries this caption…

After a Jaguars player blows the whistle on the NFL for rigging games, Commissioner Roger Goodell admits to the accusations, acknowledging the long time suspicions of fans. WFKE News delves deep into the nuance of game rigging.

Oh, did I mention that the video was produced by Satire Daily? Because it is. Not that some people seemed to notice.

@NFL you should be ashamed of yourself. I was already not a big fan of football, but now I'm definitely against it. Concussions and rigging the games. I'm never watching another game again. https://t.co/oXydaUTbrD

@nflcommish Roger Goodell admits to rigging NFL games. This guy has destroyed the game. I stopped watching this year 4 players not standing for the flag. This rigging games takes my hatred for the NFL 2 a new level #WednesdayWisdom #TurnOffNFL https://t.co/GCMeroeQKp

Bro the NFL openly admitted to rigging games for ratings and money… “We want Brady to go out as a king.”

I will never watch the @NFL again until @nflcommish is FIRED how can the #nfl be rigging games, that defeats the purpose of football smh what a disgrace

Sorry but I can't support this league after they admitted to rigging games. I hope the Eagles win but I can't see the NFL letting the Eagles get a fair chance to win the Super Bowl. It's disappointing because I used to defend the NFL saying it didn't do those things.

@NFL so y’all finally admitting to rigging games hm. Made me lose so much respect for this league….

ROGER GOODELL ADMITTED TO RIGGING GAMES @NFL IS A JOKE

So… we gonna act like they just didn’t admit to rigging NFL games????? pic.twitter.com/5aR7aCZCDM

I hope they are all just being facetious, but…

My dad shared a "satire daily" thing about the NFL rigging games on FB and I'm not sure he really knows it is fake.

He’s not alone, buddy. Not even close.

I do, however, have to admit that Satire Daily did do a nice job with the video. And as a wise man, George Costanza, once said, “Just remember, it’s not a lie if you believe it.” Go #TeamAsteroid.