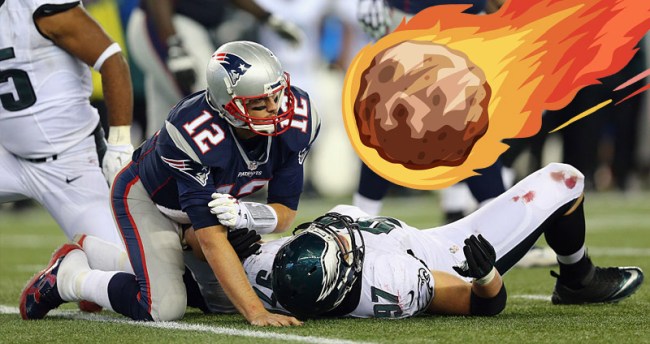 As EVERY NFL fan knows (other than Philadelphia and New England fans, and even some of them know it) Eagles and Patriots fans are almost without fail completely insufferable.

Patriots fans are because after this season they will have been in TEN Super Bowls. (Mostly because the league IS TOTALLY RIGGED! Just kidding, but seriously, think about it.)

Eagles fans are insufferable because, well, I really don’t know why they are. They haven’t won even one Super Bowl in the 51 years since the first one. (Those NFL championships back in 1948, 1949 and 1960? Big deal.) So other than just being a bunch of giant d-bags there really isn’t a reason for it. Heck, there’s even a section of the Eagles’ Wikipedia page devoted to “Fans: Bad Behavior.”

So yeah, no one outside of Philly and Pats fans really has any desire to see either one of these teams win Super Bowl LII. I mean, can you think of a worse combination of football teams to have to watch if you aren’t one of their annoying fans? I think I would rather see the San Diego Chargers take on the Tennessee Titans, two franchises that NO ONE gives a shit about, rather than the Eagles and Patriots.

In fact, when given a choice, it appears that most NFL fans would prefer an asteroid strike the planet before the game takes place just to ensure it.

Welp, I've come to terms with the fact that I'll be rooting for an asteroid to hit Minneapolis for the Eagles/Patriots game. #WorstSuperBowlEver

There's actually an asteroid that's set to "narrowly miss Earth" the night of the Super Bowl. I think I know what I'm actually rooting for that night.

I am so torn. I don't know whether to root for the Eagles, the Patriots, or a giant asteroid to take us all out.

I’m rooting for an asteroid in this Super Bowl.

If the apocalypse is what it takes to stop another Pats Super Bowl win, then bring on the asteroid https://t.co/xpROw7YGX3

Super Bowl Sunday: 30 seconds left in the Super Bowl, the Eagles are about to take a knee up 24-17 with the ball vs. the Patriots

NASA: Our prediction was slightly off
*asteroid smashes into earth killing everyone* https://t.co/jJKH0CFb55

If we could guarantee that it falls on the Patriots, I'm all for it.

Looking ahead to the Super Bowl: Go…Asteroid?

I didn’t realize how much i actually need an asteroid to hit an Eagles/Pats Super Bowl till I read this tweet. https://t.co/XczRb4Pgz0

On the KDKA-TV Facebook page… Who are Pittsburgh fans rooting for in the Super Bowl? As you can imagine… Asteroid is winning. https://t.co/n8BraYQOeo pic.twitter.com/uecGVL6hmF

No doubt about it.