UTSA Student Pretends He Is A Recruit, Fakes His Way Into Texas A&M Locker Room After Alabama Win 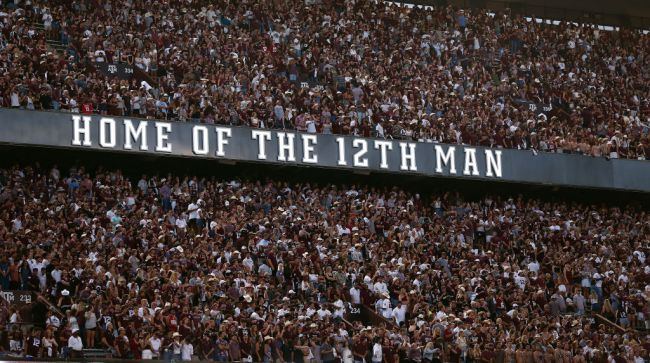 Alex Sunderland is not a student at Texas A&M University— he is a 22-year-old senior at the University of Texas, San Antonio. And yet, somehow, after the Aggies beat No. 1 Alabama over the weekend, Sunderland ended up celebrating in the team locker room.

The story is one of the best this year and he documented the evening on TikTok:

Sunderland found a random VIP pass for a local radio station event and decided to test his luck. The pass was not for him to get into the game and the man who designed the pass confirmed that notion.

In a Sports Illustrated article written by the ever-brilliant Richard Johnson, Sunderland documented the entire evening. It’s a wild journey.

Sunderland began his game day by drinking at a Latino community tailgate outside of Kyle Field. At some point during the first half, he stumbled across the VIP pass.

He wasn’t sure what it was for but figured that it was worth a shot. If he ended up getting turned away, he would be right back in the same spot at which he started.

After making his way into the stadium around halftime, Sunderland decided that he was going to continue to test his luck.

“I’m not gonna go to the nosebleed section; I’m gonna go front row,” Sunderland said to Sports Illustrated. “As I’m going down the stairs in between the stands I remember when I was a senior in high school I got recruited by UTSA to be a kicker. So I knew that the recruits, we all sat in a special designated section and they always had great seats. So I was like, I’m just gonna say I was a recruit.”

That is exactly what Sunderland did and, once again, it worked. He told an usher that he was with the team, flashed his badge, and was brought down to the recruit section.

It was then that he was forced to come up with his next move. As one of the members on the A&M recruiting staff came over to ask him if he was a recruit, Sunderland had an idea.

Having grown up in a bilingual household, he decided to play dumb and speak broken English. What the staffer didn’t know couldn’t hurt him.

“So when he comes up to me and says ‘you’re a recruit?’ I saw it in his face,” Sunderland told Sports Illustrated. “He just did not believe me and then the first thing that came to mind is: I’m gonna pretend I don’t speak English. So I just go, ‘Yes, me kicker, me kicker from Mexico. Me kicker recruit.’ And he goes, ‘Oh yeah, of course; follow me.’ I said under my breath, ‘There’s no way this is happening.’”

Sure enough, it was happening.

Not long thereafter, Texas A&M kicker Seth Small curved the game-winner between the uprights to upset No. 1 Alabama. The fans stormed the field and Sunderland joined in on the raucous.

“Literally an hour and a half ago I was drinking at a tailgate and now I’m rushing the field for a school I don’t even go to,” he said to Sports Illustrated. “So after like two or three minutes, I’m on the field and everyone’s having a good time. I realize I don’t wanna just be on the field, I wanna try and go into the locker room.”

Sunderland asked the first player he could find and, using his broken english accent, he asked how to get to the locker room. And next thing he knew, A&M’s backup kicker Randy Bond was leading him into the team tunnel.

After flashing his VIP pass and getting past five police officers, Sunderland made it to the locker room where the players were celebrating. He even spoke to quarterback Zach Calzada in Spanish.

“And in Spanish [Calzada] goes ¿Que onda, guey? ¿Hablas español?” Sunderland told Sports Illustrated. “He spoke Spanish to me. So he spoke to me for like 10–15 seconds.”

And then, in a moment truly unbelievable, he received a recruiting pitch from head coach Jimbo Fisher. Sunderland had never seen a photo of Fisher and had no idea what he looked like, but he was pointed in the right direction by Bond.

Here is what Sunderland had to say to S.I. about his interaction with Fisher:

“He goes ‘I’m glad you had a great time. We have a great program here. We have a great family and a great community. I hope you really consider it,'” he said to Sports Illustrated. “And I’m laughing to myself, this guy is actually recruiting me right now. He has no idea I’m 22.”

Shortly thereafter, Sunderland had a front-row seat to Fisher’s postgame speech. You can see his white hat in the forefront to the left of a guy in a grey hoodie and the right of A&M players with the last names Collins and Johnson around the 21:05-mark:

After the team broke from their huddle, Sunderland chose to tell the Aggie specialists the truth and then made his way out of the building. He is not worried if he is banned from the stadium because he will never be back.

The entire thing was worth it and it couldn’t have worked out any better. Sunderland even plans to sell the video he took of Fisher’s speech as an NFT.

This is the college football story of the year and it all started with a VIP pass. Shoutout to Sunderland, what a rush!