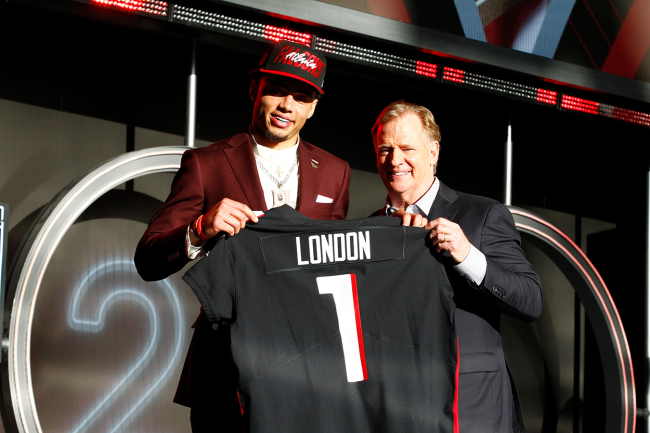 On Thursday night, the Falcons kicked off what became a historic NFL Draft at the wide receiver position. 2022 marked the first time in NFL history that six receivers were selected in the first 20 picks and Atlanta was in on the action.

Last night marked the first time in the Common Draft era that six WRs were taken in the Top 20:

A position on the rise.

Although Drake London was considered one of the top prospects in this year’s draft, there was a lot of debate about whether Atlanta made the right pick.

It isn’t to say that London will be bad— he has the potential to blossom into a superstar. And it isn’t a question of how London fits into the offense— he will slide right into an explosive skill position group led by 2021 first round pick Kyle Pitts.

Less about London himself, the debate was about his position.

Many fans and analysts alike felt as though the Falcons needed to go in the offensive tackle direction. Atlanta’s offensive line has been abysmal in recent years and as the franchise looks to continue its rebuild, a big left tackle could have helped a lot.

Instead, they went receiver.

Typically, when a front office calls a prospect to let them know he is the guy, most of the room is thrilled. There is jubilee and exuberance.

That did not appear to be the case on Thursday night. Though there is no reason not to be excited about who London could become, it seemed as though maybe the other staffers in charge of Atlanta’s draft strategy wanted a tackle. They couldn’t have looked less excited.

Again, London was a good pick. But the lack of excitement is astonishing.