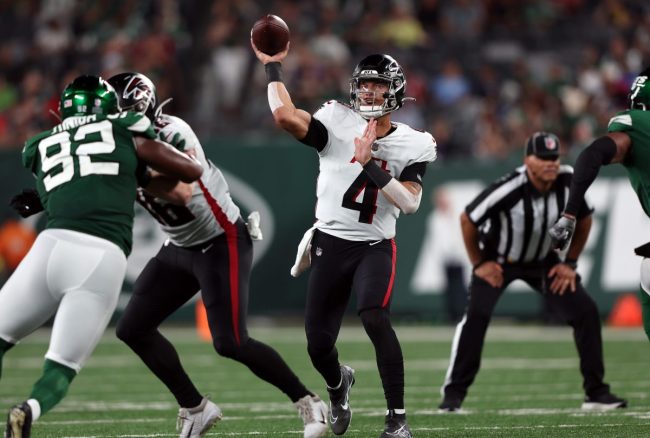 Desmond Ridder is doing his best to make coaches question which quarterback should start for the Falcons next season. The rookie out of Cincinnati put on quite the showing in the team’s second preseason game over the weekend.

Atlanta had a primetime Monday night matchup against the Jets, where Ridder went 10-13 with 143 passing yards. The signal caller was just about as accurate as you can be, throwing both dimes and darts in tight coverage.

Pro Football Focus contributor Anthony Treash made a highlight clip from the first-year passer’s performance on Monday night, and it’s got many wondering if he should be the starter over Marcus Mariota.

While Mariota had a strong showing in his own right, going 6-10 with 132 yards and a score, some of the throws from Ridder were just too impressive to ignore.

Take a look at the reaction from Falcons’ fans to Desmond Ridder’s latest outing.

It’s safe to say that Falcons fans were impressed with Desmond Ridder. Some are even hoping to see him start, though it will be tough for the rookie to unseat a veteran player under center.

Take a look at the response from NFL viewers.

Best rookie performance from a QB so far this year ..no cap…

Best thing about those clips is that Ridder drops back and doesn't hesitate. He isn't scrambling waiting for them to get more open, he just hits them in stride.

Mariota will likely start Game 1 for the Falcons at quarterback, but Desmond Ridder is giving the coaching staff something to think about. After entering the year with low expectations, Atlanta is now beginning to build some confidence in the QB room.