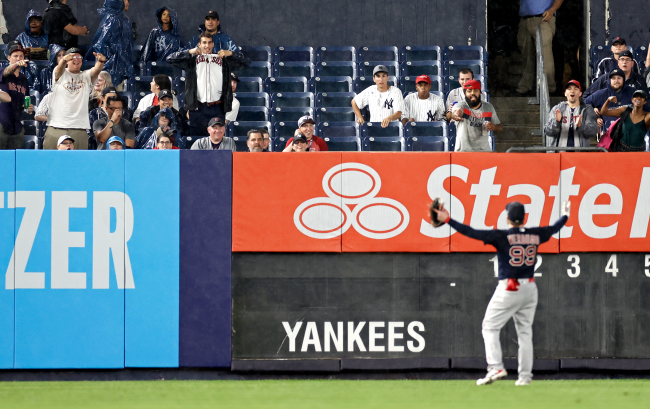 On Saturday night, a fan at Yankee Stadium threw a baseball on to the field and it struck Boston Red Sox outfielder Alex Verdugo. Verdugo was understandably furious and Red Sox manager Alex Cora pulled his team off the field.

Verdugo was especially angry because the baseball the fan threw at him was one he had tossed into the stands after warming up prior to the inning, intending it to be caught by a young fan in a Red Sox jersey. Instead, the ball was intercepted by a Yankees fan who threw it back at Verdugo once his back was turned.

That fan has since been identified and has been officially banned from ever setting foot in a Major League Baseball park for life.

The Yankees were the first to ban the fan from its stadium.

“While the Yankees appreciate the spirit and passion of our fans in our various rivalries -— especially with the Red Sox — reckless, disorderly and dangerous behavior that puts the safety of players, field staff or fellow fans in jeopardy will not be tolerated,” the Yankees said in a statement. “There is absolutely no place for it at Yankee Stadium. The safety of everyone at Yankee Stadium, including guests in the stands and players on the field, will always be the top priority for the Yankees organization every time we open our doors.”

According to multiple reports, the fan has also been banned from the other 29 MLB ballparks.

Yankees manager Aaron Boone said that he had personally apologized to both Verdugo and Cora.

“My understanding is they did catch the guy,” said Boone after the game. “Hopefully, he’s in jail right now. Yeah, it’s just a bad situation. If I was Alex Cora, I would have done the same thing as far as going out and getting his guys off the field. There’s zero place for that in this great game, in this great rivalry. Players should never feel like they ever have to worry about anything like that. So, you know, I already reached out to Alex Cora, just apologized, and to Alex Verdugo. That’s just a terrible, bad, sad situation and sorry about that.”

Aaron Boone sounds off on the Yankee fan who hit Alex Verdugo with a ball:

"There's zero place for that in this great game and in this great rivalry. Players should never feel like they have to worry about anything like that." pic.twitter.com/MNO8nd8zTA

Cora said he pulled his players off the field if for no other reason than to just give them, and Verdugo in particular, some time to calm down.

“I know my left fielder. I know Alex,” said Cora. “He needed time to breathe and to gather his thoughts. It seemed like nobody was listening to me. You never know. What if he jumps the fence? What if he goes up there [into the crowd]?”

Yankee Stadium security guard Carlos Ventura said that after he was hit by the baseball, Verdugo “turned around and he started yelling at them. My supervisor found the person and they got him.”

The fan, according to NJ.com via a New York Police Department spokesman, was not arrested.