Fan Creates Painful New Anthem For The Vegas Raiders And I’m Not Sure What’s Funnier, The Video Or The Reactions To It 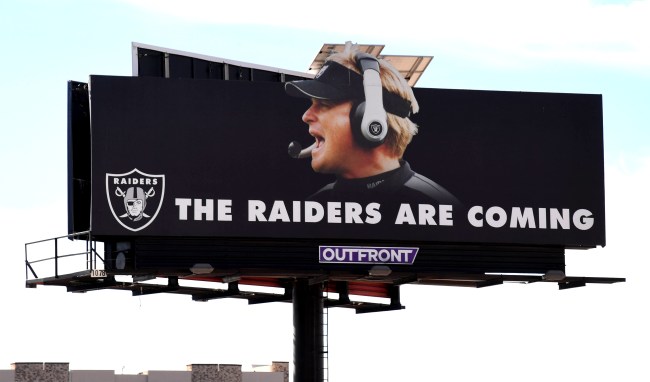 Football fans in Las Vegas are incredibly hyped to have the Raiders coming to town and bringing one of the coolest looking sports stadium you will ever see (and perhaps Tom Brady or Andrew Luck) with them.

After all, who wouldn’t by psyched to have people like this coming to your town all fall and winter?

Heck, Vegas resident and noted Patriots fan Dana White says he’s planning ask Brady about playing for Raiders during the UFC 248 promotional livestream on Wednesday and has another livestream scheduled with star Raiders running back Josh Jacobs on Friday.

White’s already got his suite at the new Allegiant Stadium right next to his ex-UFC partner Lorenzo Fertitta.

“Sure, I’ll ask him,” White told Bryan Salmond, sports anchor at KSNV-TV in Vegas. “Trust me, I’ve been terrorizing Brady. If you ever want to rob a bank, do it with Brady. This guy doesn’t say [anything] to anybody. I know I’ve been trying to get him. Wahlberg. Matt Damon and Ben Affleck have been terrorizing him. Everybody from Boston has been terrorizing this guy and he hasn’t been saying anything. Obviously, if he doesn’t sign with Boston, which is where I would like him to be, hopefully he comes to Vegas.”

Another sign of just how excited Vegas residents are to see the Silver and Black coming to town is a new Raiders anthem created by local videographer JediRich Studios.

Warning: Turn your sound down a little but before hitting play. Trust me, I didn’t do it and paid the price.

That’s really… something, isn’t it?

Sadly, for them, it doesn’t appear likely to catch on if the reactions on Twitter are any indication.

That was hard to watch and even harder to listen to. pic.twitter.com/UXYlCLY5wS

I can't think of a more fitting anthem for the Raiders, right here.

Is it possible to un-hear something?

Don't ever, for any reason, for anyone or anything, don't ever repeat this song to anyone. No matter what. That is all

You need to collaborate with this guy https://t.co/fobHdfdnYk