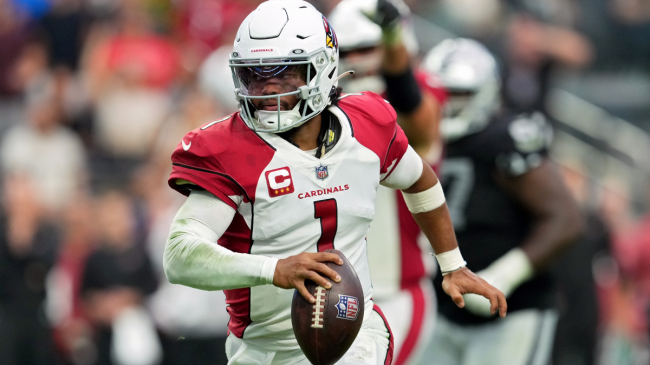 Kyler Murray is back to doing Kyler Murray things. The incredibly mobile quarterback pulled off one of the most insane two-point conversions you’ll ever see.

With the Cardinals trailing to the Raiders, 23-7, Murray led the offense to a fourth quarter touchdown. To get his team within one score, Arizona went for two.

And Murray’s effort on the two-point conversion was monumental.

The passer stepped back in the pocket before being forced to scramble. Murray ran about 20 yards backwards, 40 yards side to side, then took off another 20 yards forward to scamper to the endzone.

While it only looks like a two-yard run in the box score, Murray ran a total of 85 yards on that insane two-point conversion.

NFL viewers were quick to respond to the scramble, posting their immediate thoughts online. Take a look.

NextGen Stats broke down the run, giving the exact distance that Murray covered before converting the two-point play.

SEC football personality Laura Rutledge said, “Just in case anyone forgot what Kyler Murray is capable of… the TD run and 2pt conversion play is a great reminder. Dude is electric.”

Just in case anyone forgot what @K1 is capable of… the TD run and 2pt conversion play is a great reminder. Dude is electric. @AZCardinals

This fan noted the insane amount of time it took for Murray to snap the ball, sit in the pocket, run in circles, and then finally find the endzone, posting, “Kyler Murray has the first 2 minute, 57-yard run for a two-point conversion in NFL history.”

Kyler Murray has the first 2 minute, 57-yard run for a two-point conversion in NFL history pic.twitter.com/usk6ANGuoz

Check out a few more initial reactions to seeing the play.

Kyler Murray’s 2-point conversion run there is one of the most amazing NFL plays I have ever seen! Holy smokes

Not only did Murray complete this two-point conversion to give his team a chance, but he then tied the game on the final play of regulation to send it to overtime. He’s definitely earning that $230M extension received over the offseason.