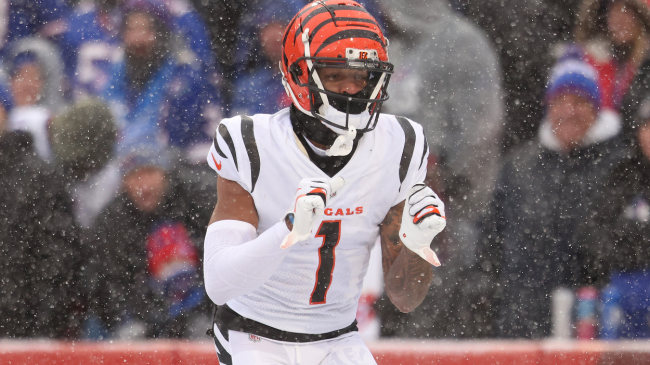 Fans around the NFL are debating a questionable call in the Bills versus Bengals game Sunday afternoon. The call took a Cincinnati touchdown off the board, and it could have an impact on the final result.

On the play, wide receiver Ja’Marr Chase appeared to haul in a scoring reception. After review, the call was overturned.

That decision set the internet on fire as fans began to react with their thoughts on the call. Most seem to believe the officiating crews got it wrong.

Take a look at the play below.

Chase looks to gain control of the ball before successfully getting two feet down inbounds. The ball does, however, move a bit upon his hitting the ground.

That late bobble was enough for referees to take the touchdown off the scoreboard, which didn’t sit right with many around the NFL. Take a look at the immediate reaction.

Skip Bayless wrote, “Ja’Marr Chase had complete control of that ball when his feet were in bounds. Only as he left the end zone was the ball jarred slightly loose. But he never dropped it. Sorry, that’s a touchdown.”

Albert Breer echoed that sentiment, saying, “I don’t know if that was a catch or not. I do know that it wasn’t obvious enough to overturn whatever the call on the field might be.”

Mike Greenberg blasted the officials, responding, “What thorough nonsense. That was absolutely 50/50 and called a catch on the field. That’s everything that’s wrong with replay. It was never intended for that level of objective minutiae.”

The overturned call changed what would’ve been a 21-7 game to 17-7 at the halftime break. We’ll see if it comes back to hurt the Bengals in the second half.

Related: Stefon Diggs shows up to Bengals-Bills game looking like a supervillain