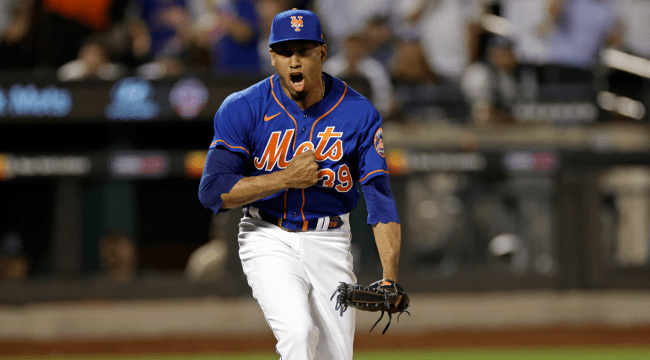 Last week, New York Mets closer Edwin Diaz’s incredible entrance went viral. Baseball fans have been loving his use of the song “Narco” by Blasterjaxx and Timmy Trumpet as he makes his way to the mound.

In fact, fans love it so much that many have decided to start using it for themselves when they do everyday tasks like walking into work and putting together a LEGO set.

Edwin Diaz has the dopest Walk Out song in Baseball! I had to start The #EdwinDiazChallenge pic.twitter.com/bVF0tE0l0I

When you need to get ready for a big LEGO building session @Mets#EdwinDiazChallenge pic.twitter.com/rLNLCiixq3

Pets are even doing it.

The “Edwin Diaz Challenge” has a very interesting backstory

Many fans don’t even realize that Edwin Diaz actually started using the song for his entrance back in 2018 when he was with the Seattle Mariners. When he was traded to the Mets in 2019, he stopped.

According to The Athletic, in 2020, Diaz says his wife said to him, “You should use the trumpet again. You pitched really good with them. I think you can do better again in New York with the trumpet.”

Interestingly, the musicians in Blasterjaxx, Thom Jongkind and Idir Makhlaf, don’t know anything about baseball.

Diaz’s epic entrance, if you can believe it, is going to get even better at some point in the very near future.

It seems Sugar Diaz will be able to walk from the bullpen to the mound with LIVE 🎺. The #Mets will have Timmy Trumpet at #CitiField. I am being told it would probably happen on August 28th. #LGM #LosMets pic.twitter.com/b4Fk2rMOxB

Between Edwin Diaz’s kickass entrance and the one now being used by new Baltimore Orioles closer Felix Bautista, dare we say baseball is almost starting to become … fun again?