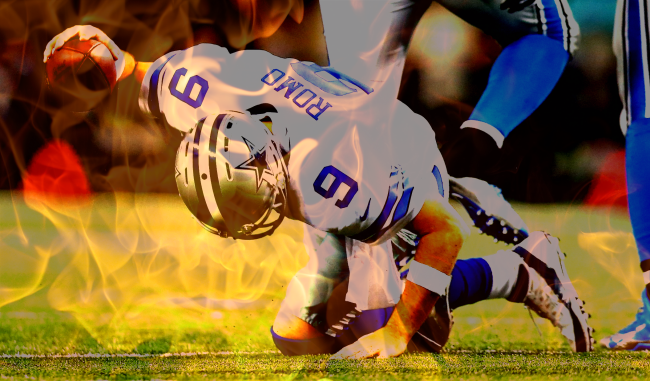 As you are probably aware (Tom Brady most certainly is), the NFL has implemented a change in what numbers certain players can wear beginning with the 2021 season. What you didn’t know is how this change was going to affect Tony Romo and the Dallas Cowboys fanbase.

Several NFL players have already taken advantage of this change. Cardinals safety Budda Baker is going from 32 to 3. Vikings cornerback Patrick Peterson is changing from 21 to 7. Buccaneers running back Leonard Fournette is dropping his number 28 in favor of the number 7 he wore at LSU. And Dallas Cowboys linebacker Jaylon Smith announced on Tuesday that he would be switching from number 54 to number 9.

And now 2016 second round pick Jaylon Smith will be wearing it because that’s the number he had during his career at Notre Dame.

Smith reportedly had to pay close to six figures to buy out the NFL’s current inventory of number 54 Cowboys jerseys.

Take a wild guess how this bit of news went over with many Dallas Cowboys fans.

9 should be retired smh

Hate it, romo broke all the cowboys passing records 9 should be retired

I AM NOT OKAY WITH JAYLON HAVING NUMBER 9. ROMO SHOULD HAVE HAD HIS NUMBER RETIRED.

Tony Romo is the greatest QB in Cowboys history

Not everyone was upset, however.

Now the HEALING PROCESS can begin for jersey # 9.

I want to forget all of the former GUT-GRENCHING LAST MINUTE HORRIFIC LOSSES caused by the former owner of jersey # 9.

I want to forget that the former owner ever attempted to play qb for Dallas!

Also, Smith reportedly talked to Tony Romo about the number and he’s supposedly cool with it. Jerry Jones also gave Smith his blessing.

Jaylon Smith on reaching out to Tony Romo about wearing No. 9: “Me and Tony are working on conversations right now. He’s a busy guy. It’s nothing but love.”

“First and foremost, just a blessing and an honor to be able to carry on the 9 legacy,” Smith said on Tuesday. “Tony Romo did an amazing job of just being elite and putting together great success for the Cowboys franchise. As you know, new players coming in always getting an opportunity to sometimes carry on legacies, and that’s the opportunity the Jones family granted me with wearing No. 9. So it’s definitely a blessing. It’s been a part of my life. I’ve been wearing No. 9 since I was 9 years old, through Pee Wee, middle school, high school, college, All-American games, you name it. No. 9 is a part of me. It’s really just a blessing to be able to continue the legacy.”

Oh, and by the way, as Dallas Cowboys director of public relations Rich Dalrymple pointed out last year, “For the record, the Cowboys are one of the few — if only — NFL teams that have never officially retired a jersey number.”

If they did, do you think there’s any chance Antonio Bryant, Dez Bryant and CeeDee Lamb would have worn the number 88? Hell no.

Also, that number 54 Jaylon Smith has been wearing? Yeah, that’s the same number that Hall of Famer Randy White wore for the Cowboys and no one seemed to mind that, did they?