Fans Were Freaking Out Over Charlie Morton Pitching A Full Inning, Striking Out Two, On A Broken Leg 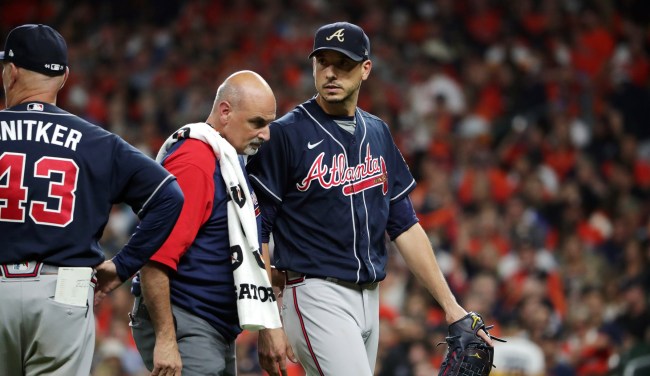 Atlanta Braves pitcher Charlie Morton did something Tuesday night that has cemented his place in World Series lore for many years to come.

The 37-year-old only pitched 2-1/3 innings in the Braves’ 6-2 win over the Hosuton Astros, but it was what he did in those 2-1/3 innings that many Major League Baseball fans will never forget.

During the second inning, Morton was facing the Astros’ Yuli Gurriel when the Houston first baseman rocketed a 102 MPH comebacker at him, striking him in the right leg.

Morton appeared to be okay as he didn’t request the trainer and then went on to get the next two outs to end the inning, including striking out Astros center fielder Chas McCormick.

Related: Joc Pederson Had The Best Answer For Why He Has Been Wearing A Pearl Necklace

Everyone rightfully assumed Morton’s leg was okay after seeing him pitch, especially when he came back out to start the third inning.

“When the inning was over, we meet and talk about what’s going on,” Morton’s catcher Travis d’Arnaud recalled. “He said, `Oh, that one got me good.’ He was kind of walking a little funny. I didn’t think it was broken.”

Morton then proceeded to strike out the first batter he faced in the third inning, 2017 American League MVP Jose Altuve, but grimaced in pain and grabbed at his right leg after the K.

Charlie Morton is leaving the game in the 3rd inning after he came up in pain after a pitch. pic.twitter.com/ZYiJ13fSZ8

It would turn out that Morton had thrown 16 pitches, gotten three outs – two of them strikeouts – with a fractured right fibula.

MLB fans and media could simply not believe it.

Charlie Morton threw 10 pitches on a broken leg, sat down for a half-inning, threw six more pitches, the last two of which were a 96-mph fastball and 80-mph curveball to strike out Jose Altuve.

So, yeah, Charlie Morton threw 16 pitches pushing off the mound with a broken leg.

Charlie Morton did all of this on a broken leg pic.twitter.com/ONuE8boYIf

“He wanted to keep going because he was down in the tunnel and he was throwing against the wall,” Braves manager Brian Snitker explained, adding that an initial X-ray after the second inning failed to reveal a fracture. “He said, `It kind of hurts more when I run. I feel good when I throw.’ Then it didn’t.”

Morton faced three more batters (and struck out two!) on apparently a broken leg. what the hell man https://t.co/ycWCQ0odbW

So Charlie Morton got three outs (with two strikeouts) with a broken leg? That guy is hardcore.

After the game, d’Arnaud said, “I wouldn’t think it’s possible. It’s incredible that he even like thought of going out there.”

Charlie Morton broke his leg in the 2nd inning.

Stayed in the game.

He then struck out Chaz McCormick. Got Martin Maldonado to fly out. And struck out Jose Altuve the next inning.

He then exited the game.

Morton was throwing 96-mph on a broken leg at 37 years old. pic.twitter.com/EXwYuwQIbH

Below the red line is pre-broken leg.

Above is, I can't stress this enough, post-BROKEN LEG.

Charlie Morton is something else. pic.twitter.com/iMy6NUmP5u

“He goes eight innings, gives up one run and is like, ‘I’m sorry, guys,'” d’Arnaud added. “He genuinely, sincerely feels like he shouldn’t have given up a run.”

Morton is now out for the rest of the 2021 World Series, but what he was able to do in the limited time he was participating in it will live on for decades, if not forever.

Legend has it that a pitcher threw 97 while recording four outs on a broken leg during the World Series. These are the types of myths you hear in the postseason but the accur- wait, it was Charlie Morton and it was yesterday? King of Atlanta