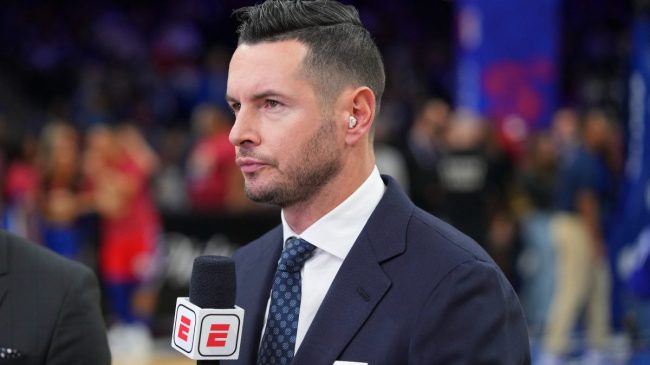 Former NBA player JJ Redick is quickly transitioning into one of the best TV personalities in sports. The three-point threat is now joining NBA and ESPN broadcasts while also appearing on podcasts around the sports world.

His Old Man and The Three segment is definitely worth a listen.

Recently, he joined the Bussin’ With The Boys chat to talk about a variety of different topics with NFLers Taylor Lewan and Will Compton. One of those talking points happened to revolve around favorite types of pizza.

“I’m going to go in order of how I want to eat these pizzas. I would say this is my No. 1 pizza. I just want shallots and hot peppers. Second pizza would be what I call a ‘Twin Special,’ my wife’s favorite pizza along with her twin, we’ll go pepperoni, white onion, green pepper. For kind of like a desert, I would go Ricotta, sausage, and maybe some sage.”

The immediate reaction (or lack thereof) from the Bussin’ With The Boys crew was hysterical. After a long moment of silence, Compton replies, “What the f*** was that??”

Compton and Lewan weren’t the only ones taken aback by the answer. A number of followers on social media have chimed in, too.

Big JJ fan until I heard this 🧐🧐 https://t.co/MMPfuyELsh

Redick responded to the criticism after “taking a lotta heat,” hoping to gain a little support.

Thoughts on this? Taking a lotta heat for try choices https://t.co/s7CouEkcPO

I’ve got no room to talk on the subject, my topping of choice is sausage and pineapple (order the Coach Tanner at Village Idiot).

As far as Redick’s choices go, No. 1 is out for me because I can’t take the heat. The dessert and Twin Special sound great though. Some of those commenting should give them a try before bashing.