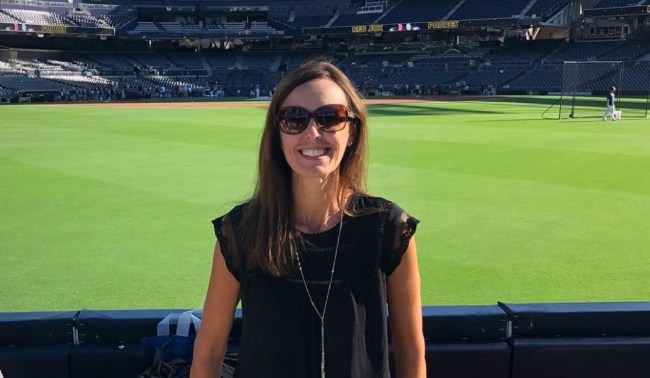 via Kristi Metzger, with permission

What do fishing and fantasy sports have in common?

There’s always the one that got away. For every trophy lunker or W on a Sunday in football season, there’s an L that stings and stays with you.

For daily fantasy expert Kristi Metzger, that sting is a stat correction by only .4 tenths of a point that cost her a cool $1 million prize.

But it will forever be the fantasy sports one that got away.

Metzger is a self-taught DFS wiz, applying analytical skills she’s learned in her day job as a banker in Sioux Falls, Iowa to daily fantasy contests on a variety of platforms. She’s made some serious bucks crushing daily fantasy sports over the years, recently earning a spot to compete in the coveted FanDuel World Fantasy Baseball Championship in September.

A die-hard Minnesota sports fan, I asked her some questions about how her career in finance helped pave the way for success in the cutthroat world of daily fantasy sports.

How did you get started playing DFS?

I always loved to play fantasy football and I had several work leagues that I was in and I always seemed to get in the championship year after year. I grew up with three brothers and we were always keeping stats for various baseball and football games and so fantasy football was a natural fit for me.

I manage a Wealth Management Department for a regional bank. One day, one of my colleagues in the finance department, who happened to also be in my work fantasy football league, introduced me to FanDuel. He told me he thought I would love it and this was the first time he introduced me to RotoGrinders as well. He said they have the best research for fantasy sports out there, and he was right.

What was your first big win?

I had a lot of success early on and so I had won a few tickets to the 2018 FanDuel Fantasy Football Fan Championship. The field consisted of 18,000 people. My brother Tyson and I love to research together and bounce ideas off of one another and I ultimately decided to make a very contrarian lineup that week as the chalk play was the New England Patriots game and they were the late game. I used Matt Ryan as my quarterback and I also had a contrarian RB in Chris Carson.

The NE game busted and my late exposure to Matt Ryan, Julio Jones, and Chris Carson vaulted me into first place and I stayed there until the end.

At the end of the day, it showed I had just won first place for $1 million. It was a surreal feeling as I had been watching the game with my brother and his family and it was an amazing day.

Little did I know that I would learn that “stat corrections” are a thing, as there was a minor .4 tenths of a point that changed my status from millionaire to second place winning $400,000.

Don’t get me wrong, $400K was an amazing win, but it is a lot to process when you think you have won the top prize. Nonetheless, it was an amazing win and it really catapulted me to try other sports that I love such as MLB and NBA.

Can you tell us about your day job? And how did the skills from it apply to getting so great at DFS?

I manage a Wealth Management Department at a Regional Bank and have done so for almost 15 years.

I have always love investments, statistics, and numbers in general, so the correlation between DFS and my job are actually pretty good.

I have always been great at spotting values in the stock market and I really take that approach to DFS. Every day you have $60K or $50K cap space to spend on either FanDuel or DraftKings and I have been able to use my skills at spotting values or good plays for DFS just as I do for investments.

How have you been able to balance your career in finance with all the research involves for DFS, as a hobby?

There is no doubt it is tough to manage everything and during the summer of 2020, RotoGrinders reached out to me to see if I would join their team to provide content. I typically spend my weekends writing articles, doing podcasts and shows, as well as completing an expert survey of my favorite plays.

I have gotten really good at time management so that I can make sure I am able to be my best at everything I do. I am very competitive and a perfectionist, so I continue to look for ways to balance everything while still having some fun!

How have your skills in DFS improved over the years?

I have really figured out how to best use all of the wonderful tools that RotoGrinders has available and I have also spent a ton of time studying the lineups of some of the best players in the industry.

I consider myself a lifelong learner with my career as well as DFS and I am always learning and reading about different thoughts/ideas to make myself a better player.

What’s your favorite win of all time so far?

Winning $400K was definitely an exciting win for me, but I was also very proud of finishing 8th in the 2019 FanDuel MLB Live Final in San Diego. It was my very first live final and I finished 8th out of 125 people.

Do you have any DFS bad beat stories when big money was on the line?

Besides my stat correction going from $1 million to $400K, I made a terrible mistake in an MLB Monster contest for FanDuel. I made a last second change from Howie Kendrick to Kevin Pillar to complete my BlueJays stack at the time and it cost me $100K.

Kendrick went on to homer at extremely low ownership and he was my one off that would have won it for me. I was so mad at myself for second-guessing and try not to do that. I really on my gut instinct a lot as I have learned it is right close to 90% of the time for me.

One of my goals in 2019 was to win a spot in a live final. I wanted to not only have the opportunity to be a part of something really special with an opportunity to win a lot of money, but I was also excited about potentially meeting other great DFS players in the industry.

I set my mind to it and won 4 seats to MLB in 2019. Since then, I have now won 12 Live Final Seats with my most recent seat win coming on Mother’s Day of this year. I stacked Baltimore and Houston and Baltimore had extremely low ownership. I actually happened to be at my brother Tyson’s house that Sunday and we were watching the Twins game.

We saw some of the stats come across the screen that showed the Orioles scoring some runs, but what really sealed it was a very low-owned Aldemys Diaz that hit a home run and put up 34 points for me. The crazy thing for me is that over the years, almost all of my significant wins have come on major holidays, my birthday, or family members birthdays!

The year I won my four baseball seats I won one on Memorial Day, Mother’s Day, the 4th of July, and my nephew’s birthday. It’s pretty crazy actually!

What are you looking the most forward to about the contest?

I am always excited to compete against the best players in the industry while going to a game at Wrigley Field.

The experience is so amazing and this year I am excited to meet some of my other RG colleagues there as well. My goal is to win one of these events, so I’m hoping to make that happen this year!

I’ve read that you have a pretty impressive collection of sports memorabilia. What are some of your favorite treasures?

Ever since I was a kid, I have been collecting baseball cards, autographs and sports memorabilia.

In March of 2020 when everything was shutting down from the pandemic, I got back into sports card collecting and I have now acquired quite a few treasured cards.

I also really like the Bowman Draft product and have a Bobby Witt rookie autographed card as well as upcoming Yankee star Jasson Dominguez. I certainly feel like a kid again collecting cards!

What are some of your favorite teams?

I was a kid when the Twins won the 1987 World Series and was fortunate enough to see Kirby Puckett play as well as meet him and get his autograph. He autographed a ball for me and it is one of my favorite treasures today.