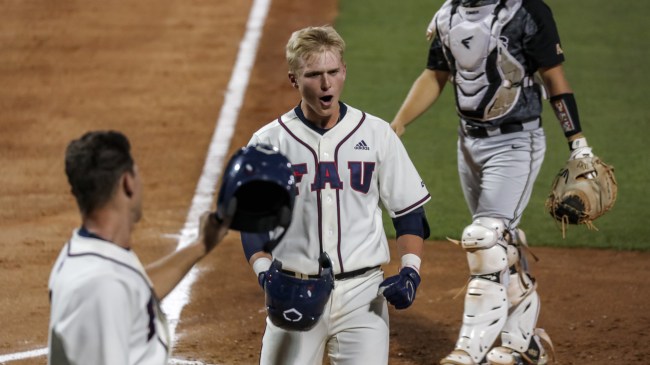 Florida Atlantic catcher Caleb Pendleton did the unthinkable on Saturday. The 6-foot-2, 190-pound freshman made his first college start against Central Florida and hit two grand slams in his first two plate appearances — in the same inning. He is the first player in collegiate history to do so.

The Owls were behind 2-1 in the second inning when Pendleton came up to bat with the bases juiced and sent one over the left field wall on a 1-2 count. 15 minutes later, after his teammate Steven Loden was hit by a pitch to load the bases, Pendleton found himself at the plate once again. He swung on the first pitch that he saw and obliterated his second grand slam in as many at-bats over the palm trees in left-centerfield to cap a 12-run inning.

FAU went on to win the game 20-15 and it was a remarkable start to Pendleton’s career. Unfortunately, as one of the broadcasters said on the call, “it’s all downhill from here.” He flew out twice and struck out in his final three appearances at the dish, and even if he goes on to be one of the best players in the nation, the adrenaline and peak of his 2-for-2, 8 RBI start will be hard to match. It was a simply ridiculous feat.

The true freshman from Jensen, Fla. comes with high expectations after being ranked the No. 13-ranked catcher and No. 150 overall recruit in the 2020 recruiting class. He certainly announced his arrival on the college level in the most profound way possible.

Relive Caleb's historic night in his own words! pic.twitter.com/zbmiaIToof

Pendleton will split time with incumbent backstop Nicholas Toney to begin the season, but if he keeps up the massive production with his bat, he might find himself in the full-time role sooner rather than later.