FC Dallas Masterfully Trolled The Sh*t Out Of Zlatan Ibrahimovic, The Cockiest Soccer Player Ever 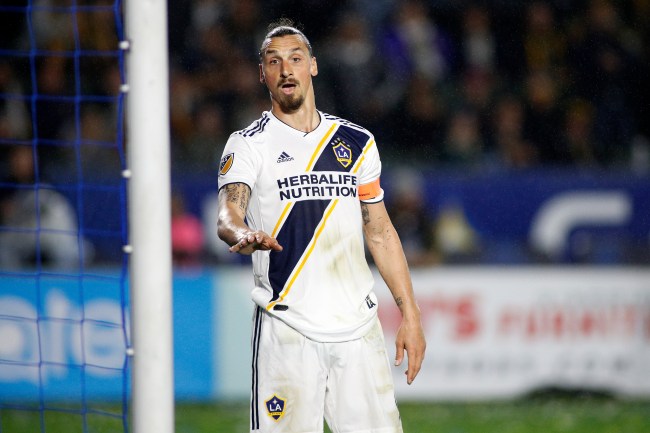 Zlatan Ibrahimović joining the LA Galaxy and coming to the MLS is quite possibly the best thing to ever happen to Major League Soccer in America. He’s a bonafide worldwide superstar with 34 goals for Ajax, 23 for Juventus, 57 for Inter Milan, 16 for Barcelona, 113 for PSG, 17 for Manchester United in the Premier League, and he already has 23 goals for the LA Galaxy.

Other accolades include scoring the 25,000th goal in Premier League history, the oldest player to score 15 goals in a PL season, the only Barcelona player to score in his first five matches, and Sweden’s all-time top goalscorer with 62 for his country.

The list goes on and on, and he has as much of a right as anyone alive to be as cocky as he is. But for that reason, he opens himself up to getting trolled extremely hard when things don’t go Zlatan’s way. For instance, FC Dallas trolled the ever living shit out of him with this Twitter video yesterday. In the clip, Zlatan claims he’ll break every MLS record ever. FC Dallas goes on to drop a big ol’ fat dookie on that claim in a hilarious takedown video.

Here’s the clip on Twitter and YouTube so you can choose your preferred medium to watch…and by the way, if you haven’t seen Zlatan’s first goal in the MLS yet then scroll down below after you watch this clip:

I’m not a diehard MLS fan but I pull for New York City FC which means I have no love for Los Angeles teams and have zero qualms applauding this move by FC Dallas. Also, I’m a Tottenham fan in the PL so I wouldn’t say it bothers me in the least to see a former Man U. player getting roasted by a football club in Dallas.

It’ll be interesting to see if Zlatan responds to this.

Moving back to last season, Zlatan shut down all of his haters when he scored two goals in his MLS debut including the game-winner. Here’s that first goal: