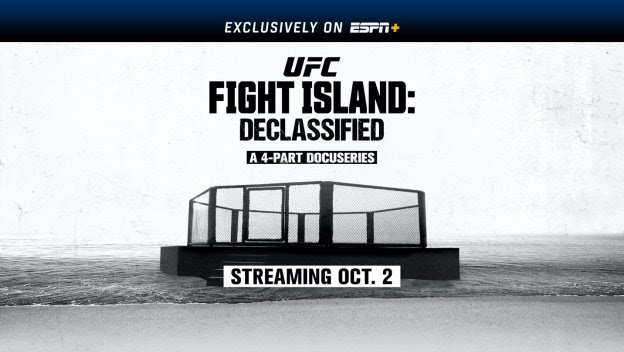 Before the NBA bubble in Orlando and before the NHL bubbles across Canada, there was Fight Island, the highly sophisticated quarantine zone set up by the UFC and the Abu Dhabi government to ensure a safe, COVID-free environment as the Ultimate Fighting Championship geared up for its July 2020 UFC 251: Usman vs. Masvidal Pay Per View card.

Fight Island became a buzzword, a catchy phrase met with equal parts cynicism and mystique in April 2020, when UFC president Dana White announced he was securing a private island to host future UFC events following the advent of the Coronavirus pandemic that not only nixed a trio of UFC cards, but also forced the promotion to create its own COVID-free zone in Jacksonville, Florida for the UFC 249 event.

And while the image of a tropical fight getaway deep in the jungle never quite came to fruition, White and the UFC made good on their promise of Fight Island, converting Yas Island in Abu Dhabi into the most secure sports venue in the world. The new documentary “Fight Island: Declassified,” set for release on ESPN+ on October 2 tells the story of how the UFC put together one of the most advanced COVID-testing schemes on the planet, helping the promotion produce five live events, with four more on tap during the month of October.

Produced by First Row Films, and directed by Rory Karpf (“Nature Boy,” “The Book of Manning”), “Fight Island: Declassified,” which runs in four 45-minute segments, follows all the major UFC players: Dana White, matchmaker Mick Maynard, broadcasters Paul Felder and Megan Olivi, and fighters like Jorge Masvidal, Kamaru Usman, Gilbert Burns, Joseph Benavidez, and Deiveson Figueiredo, as they travel from points around the world like Las Vegas, Brazil, London, and Moscow, all the way to Abu Dhabi, enduring a handful of COVID tests and numerous quarantines before fight night.

Taking no fewer than eight COVID tests himself, Karpf and his three camera teams embedded themselves with White and the fighters, documenting the ups and downs, and highs and lows, of fighting on a historic event during a global pandemic.

Having worked with the UFC previously on the Dana White’s Lookin’ For a Fight series, Karpf was given unprecedented access to tell the story of Fight Island: the spectacle, the hoopla, the historic feat, and of course the fights. From the mega-selling UFC 251: Usman vs. Masvidal Pay Per View, to the Benavidez vs. Figueiredo flyweight title fight, Karpf and his crew were on hand to document MMA, inside the bubble.

What they’ve produced is the closest look fans and viewers will have to the Fight Island experience, from the pre-quarantines in satellite cities around the world and chartered jumbo jets, to even more quarantines at the W Abu Dhabi and training sessions on Yas beach, which was outfitted with its own version of the UFC Octagon.

Shooting round-the-clock, Karpf developed a series of storylines central to the COVID-19 pandemic. Without divulging too many details, he reveals lesser known fighters like Mounir Lazzez and Jared Gordon, whose entire corner team tested positive for the Coronavirus prior to boarding their flight to Abu Dhabi, are heavily featured in the series, which is an homage to the UFC’s effort to be the first sport back in action following the pandemic. There is also a look at Gilbert Burns, who was scheduled to fight Usman for the welterweight title in the UFC 251 PPV main event, before he tested positive for COVID and was removed from the card. Burn never even had the chance to board the flight to Fight Island.

And, unlike other bubbles, for example the NBA’s quarantine zone at Disney World, which is currently in its final week as the Lakers and Heat battle it out in the finals, the UFC-Yas Island bubble managed to completely eliminate the Coronavirus from the region, with not a single athlete testing positive during the entire first run of Fight Island (the UFC is currently back in Abu Dhabi through the end of October and UFC 254: Khabib vs. Gaethje for its second FIght Island run).

Given the absence of fans in attendance, Karpf and co. became the flies on the wall, delivering a true inside look at Fight Island. And in “Fight Island: Declassified,” Karpf captures three weeks of incredible fight action, which included major title fights like Usman vs. Masvidal, the featherweight rematch between Alexander Volkanovski and former champion Max Holloway, and the crowning of the new bantamweight king, Petr Yan, who finished legend Jose Aldo at UFC 251.

There was also the arrival of the UFC’s newest hype train Khamzat Chimaev, who set a UFC record when he competed twice in a 10-day span, in two different weight classes nonetheless.

Set for release on ESPN+ on October 2, “Fight Island: Declassified” brings fans closer to Fight Island than they could have ever imagined, so crack open a few Modelos, break out the Devour frozen pizzas, and enjoy the fights before the fights.