Before Making History With A Triple Axel In The Olympics, Mirai Nagasu Was An Avalanche Ice Girl 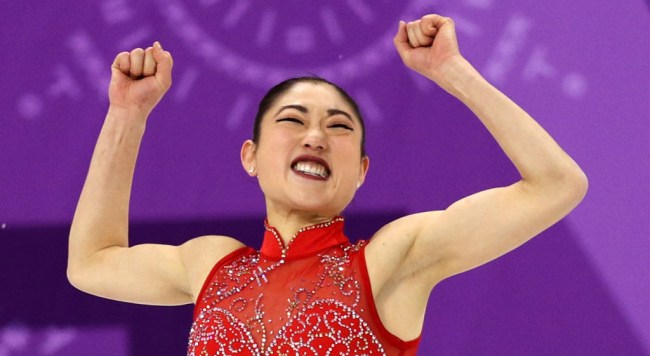 Proving that old adage, “you just never know,” who among those that attended a Colorado Avalanche during the 2015-16 season would have guessed that one of the ice girls would go on to make history at the 2018 Winter Olympics in PyeongChang?

Which is exactly what happened when Team USA figure skater Mirai Nagasu became the first American woman to successfully land a triple axel during Olympic competition.

That’s right, Nagasu went from cleaning the ice at the Pepsi Center in Denver to winning a medal in the Gangneung Ice Arena in South Korea.

Here she is landing that historic triple axel which helped win a bronze medal for Team USA.

Naturally, the people back in Colorado were very thrilled that one of their own (Nagasu is originally from Arcadia, California, but moved to Colorado Springs in 2014 to train) was having such success at the Winter Olympics. Denver’s 9News was the first to congratulate her on her journey from Avs ice girl to making history.

Before @mirai_nagasu was landing triple axels, she was a @Avalanche Ice Girl during the 2015-16 season. #9Sports pic.twitter.com/8tTd8NgyLM

Nagasu quickly saw the tweet and responded with the perfect, and logical, reply.

“You used to clean the ice, now you own it, ” appropriately wrote one Twitter commenter.

Later in the day, the Colorado Avalanche also sent well wishes to their former employee.

Mirai Nagasu is the first ever American woman to land a triple axel in Olympic competition.

And it was so, so awesome. #GoAvsGo https://t.co/nvNOlTO5Jw

Of course, the Avs ice girls were already well aware, a month before the Winter Olympics, that they had someone special to root for in PyeongChang.

Congratulations to our former Ice Girl Mirai on qualifying for the #WinterOlympics!

In addition to already earning a medal at the Olympic Games, the 24-year-old Nagasu has been righteously fangirling on social media over some of the attention she’s gotten from celebrities.

I watched Home Again on the way to the Olympics and I know it’s a movie but I wished you were my mom. You’re my hero. ❤️ https://t.co/LRHEMEXroE

My #MondayMotivation is @mirai_nagasu, the first American woman to land a triple axel at the Olympics. Heading to the gym to start working on it!! pic.twitter.com/DMCsDaPpI4

As a @bigbangtheory enthusiast, this is the coolest! I’m dying of happiness. ⛸ https://t.co/54BzwpHhiR

When will I get to meet you? https://t.co/jPOlwrbtgs

Shiiiiit like to see you give her a bad score!!! @NBCOlympics @Olympics pic.twitter.com/0krtijP4vb

Omg I wish I was a bamf like you @Lesdoggg https://t.co/7ZfQ3NMNCz