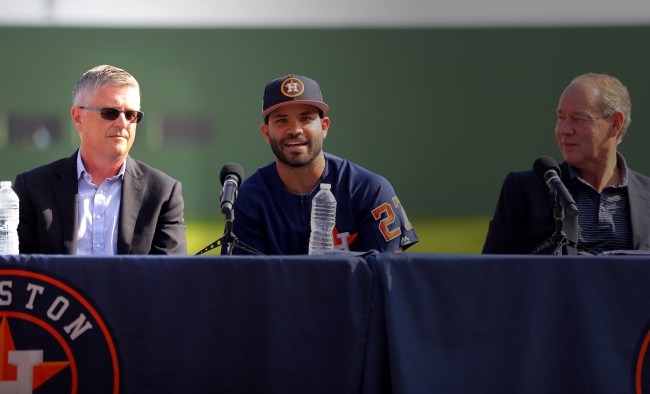 Back in January, Major League Baseball commissioner Rob Manfred announced that Houston Astros manager A.J. Hinch and general manager Jeff Luhnow would be suspended for one year as a result of the sign-stealing scandal that helped the team cheat its way to the 2017 World Series crown.

Outside of fining the Astros $5 million and taking away their first and second-round picks in the 2020 and 2021 drafts, that was it.

It was a pitiful slap on the wrist that almost every Major League Baseball team would be willing to pay in exchange for winning a World Series.

Fast forward nine months and Hinch is now the new manager of the Detroit Tigers.

Luhnow, on the other hand, is still unemployed. And he’s suing the Astros.

In a 17-page civil complaint filed with the District Clerk Harris County, Texas, on Nov. 9, Luhnow makes numerous claims and seeks to reveal some of the hidden negotiations between MLB commissioner Manfred and Astros team owner Jim Crane that allowed Crane to keep his World Series title in return for allegedly making Luhnow one of the scapegoats in the sign stealing scandal.

“The MLB’s ‘investigation’ actually was a negotiated resolution between Astros’ owner Jim Crane and MLB Commissioner Robert Manfred that enabled the team to keep its World Series championship, went to great lengths to publicly exonerate Crane, and scapegoated Luhnow for a sign-stealing scandal that he had no knowledge of and played no part in,” reads the lawsuit. “The sign‐stealing activities were not directed by the Astros’ front office.”

Of note, when Manfred (pictured below) announced his decision about Luhnow’s suspension, he admitted that the general manager was unaware of the sign-stealing, but suspended him anyway because, as he wrote, “It is the job of the general manager to be aware of the activities of his staff and players, and to ensure that those activities comport with both standards of conduct set by club ownership and MLB rules.”

Luhnow is seeking a jury trial rather than an arbitrator as specified in Lunhow’s contract.

“[Arbitration proceedings] would deprive Luhnow of the due process that is fundamental to the performance of any arbitration agreement,” the lawsuit reads. “For these reasons, the arbitration agreement cannot be enforced and the case is properly before this Court. Alternatively, the court should appoint a neutral arbitrator to resolve this dispute.”

Luhnow, who says he is owed more than $22 million in guaranteed compensation, also claims that MLB commissioner Manfred and Astros owner Jim Crane negotiated a secret deal after exchanging “a series of proposals” that “absolved” Crane and the players of blame in the scandal.

Should the lawsuit get to trial, it would be bad news for Major League Baseball as it would be forced to have MLB officials like Manfred testify, and could result in much, if not all, of MLB’s investigation and documents, including interviews with 68 witnesses, being revealed to the general public.