This 12.5-Foot Giant Bigeye Thresher Shark Caught In The Florida Keys Looks Like A Straight Up Alien 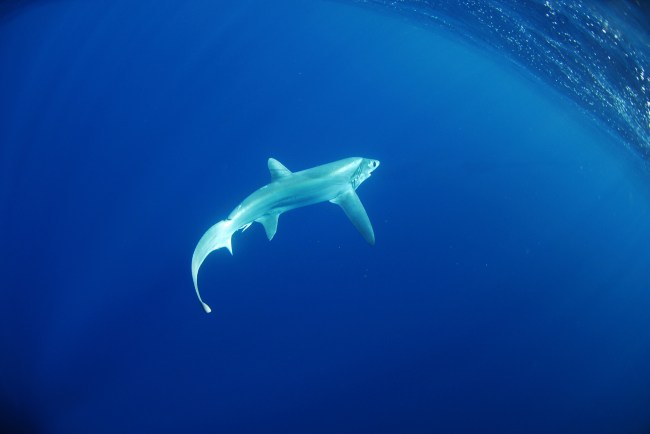 One of the greatest thrills of proper Deep Sea Fishing is that you truly never know what you are going to catch. Sure, you almost always have a target species in mind (Tuna, Marlin, Swordfish, etc) when you head offshore but once you get into the really deep water there’s no telling what will swim by and take the bait.

Capt. Nick Stanczyk specializes in daytime swordfish trips out of Islamorada in The Florida Keys. He’s not just good at catching swordfish, he’s the actual best. He’s tagged (and released) more swordfish in the past few years than any other fishing captain in the entire world and he has the awards to back this up. He also keeps some of those fish to throw on his Traeger grill at home which makes for some fun Instagram content.

Nick just got a new boat, a Freeman Boatworks 37VH, which is $$$$$ but worth every penny. He’s been slaying the fish since putting the new boat in the water at Bud N Mary’s Marina in Islamorada and on a recent daytime Swordfish charter, he hooked into something BIG.

The hope was that it was a Swordfish. After all, he caught this Florida state record 757-pound Swordfish a few months ago that took 8 hours to reel in. But when they got the fish high enough up in the water column to see what it was they realized it was a rare Bigeye Thresher Shark that looks like an alien species. He’s just thrown up this clip of that shark on his StanzFam YouTube channel:

Here are some more photographs of that crazy catch:

The shark was tagged and released after taking some photographs and video of the catch.

I mentioned before, you NEVER know what you’ll hook up with when you’re fishing in really deep water. I’m talking like 1200+ feet of water. On a trip a week or two ago, Capt. Nick hauled in this Giant Bluefin Tuna, a rare catch in Florida:

The Bigeye Thresher Shark is found all throughout the world. It’s been seen from New York to Florida to Cuba to Brazi. In Portugal, in the Indian Ocean, Australia, New Zealand, and all over.

This shark is named for the enormous eyeballs which enable it to ‘conduct a diel vertical migration’ while swimming across the globe. This means it can stay in really deep lowlight water during the day and then swim up in the water column to hunt and feed at night closer to the surface and still be able to see well in those lowlight conditions.

To learn more about this rare shark you can click here to comb over the Wikipedia page.