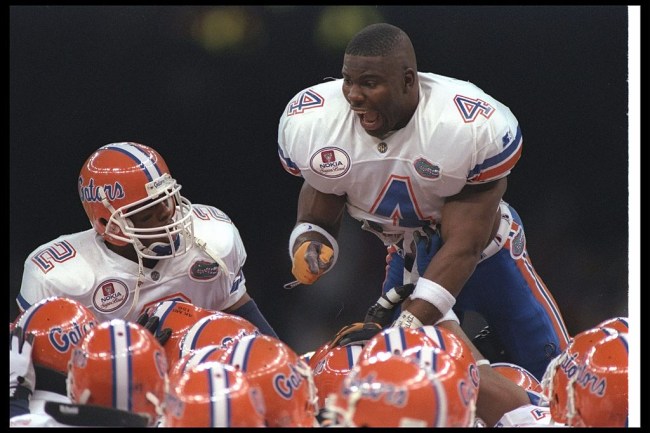 Last week The University of Florida announced that it would be discontinuing its very well-known ‘Gator Bait’ chant from all sporting events due to racist imagery. The announcement came right after UNLV removed its ‘Hey Reb’ statue from campus citing confederate ties and Virginia removing the curved sword handles from its logo cited to be linked to slavery.

Lawrence Wright, the former Florida safety that created the ‘Gator Bait’ chant after the 1996 season, is now asking for the school not to ban the cheer.

While Wright stated that he respects the university’s president, Dr. Kent Fuchs, he told TMZ he doesn’t see the chant as being racist. “Let’s have a conversation, let’s see if, as a family, we can get on the same page and unite,” said Wright.

Fuchs’ announcement about the discontinuation of the chant stated that the band will no longer perform the chant, but he also revealed that he personally doesn’t know any evidence of racism related to the cheer.

“While I know of no evidence of racism associated with our “Gator Bait” cheer at UF sporting events, there is horrific historic racist imagery associated with the phrase. Accordingly University Athletics and the Gator Band will discontinue the use of the cheer.”

In the statement titled ‘Another step toward positive change against racism,’ three major areas of focus were detailed.

Among the many changes, the university stated that the 2020-21 academic year “will focus on the Black experience, racism, and inequity” and the school will “require training of all current and new students, faculty and staff on racism, inclusion and bias.”