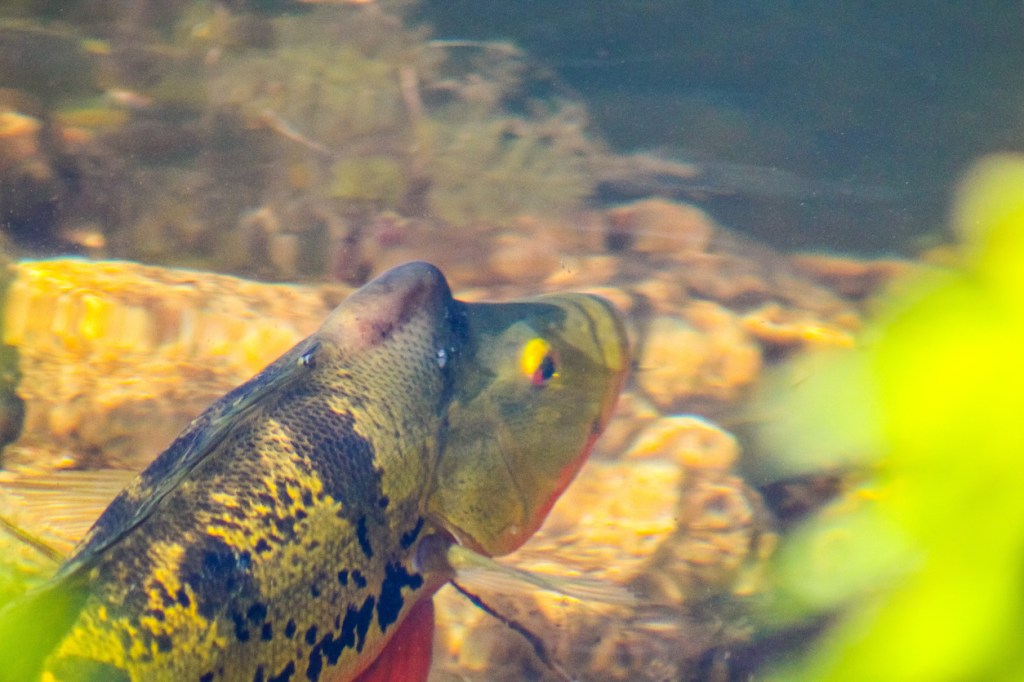 One of my biggest shortcomings as a born-and-raised Floridian who lives for fishing is that I’ve never caught a Peacock Bass.

These fish can be found throughout South Florida in canals and lakes. An angler’s best chance to catch one would be the greater Miami area but they’ve also jumped over to Naples and Ft. Myers area. And one of my neighbors recently confided in me that he saw one in a nearby lake (I’m not naming it) so these fish are moving north as well.

These tropical fish from South American were introduced to Miami canals in the early 1980s to eat the tilapia which were reproducing too rapidly, and to keep the populations of other cichlids at bay. This species doesn’t handle cold water well and while most non-native species are quick to spread outside of where they are introduced the Butterfly Peacock Bass has mostly stayed put. They are also the first and only nonnative species to be legally introduced to Florida.

The foreheads on these fish are amazing. They look like they could headbutt you and knock you out cold. And they have the ‘false eye’ on their tails to lure predators into attacking their tails instead of their heads.

A press release from Florida’s Big Catch program states that FWC biologists have documented bigger fish than this one so there are certainly records out there to be caught.

The current all-tackle IGFA Fishing World Record for Butterfly Peacock Bass is a 12 lbs 9oz ( 5.71 kg) fish caught in the Chiguao River, Bolivar State, Venezuela in January, 200 by angler Antonio Campa G. This is a species that has a TON of fishing world records because fly fishermen target this species and there are all sorts of records for various line classes.

Just so you can see how hard these fish strike, here’s a clip of giant Peacock Bass hammering lures in the Amazon:

In addition to Florida, the Butterfly Peacock Bass was also previously introduced to Hawaii back in 1957. This subspecies of Peacock Bass can also be found in Panama, Puerto Rico, Guam, and the Dominican Republic.

If you find yourself in South Florida and want to catch a Peacock Bass there are lots of options. You can hit the canals and fish for them yourself, you can hire a guide and do a walking tour around lakes and canals or you can do a guided boat tour. Just hit up Google and there are a ton of guides out there!