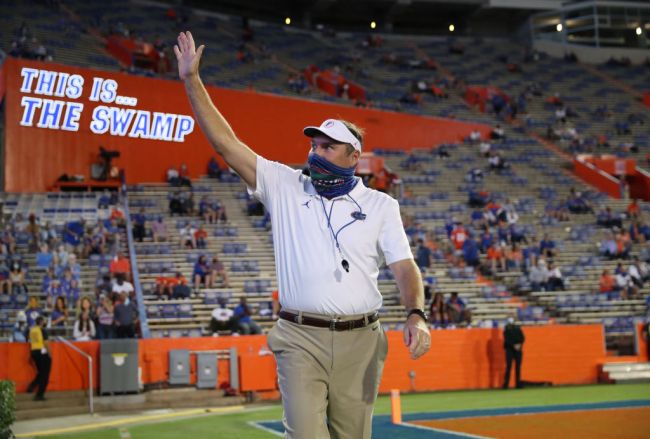 The NCAA made a rather surprising announcement on Tuesday afternoon as it handed out punishments for Florida’s football program revolved around recruiting and Gators head coach Dan Mullen.

According to the NCAA, Mullen didn’t promote an “atmosphere of compliance” therefore he was given a one-year show cause penalty for recruiting violations.

The NCAA laid out the details of the Level II recruiting violations which involved one of the team’s assistant coaches and Mullen making “impermissible in-person contact with a prospect.” In total, the NCAA found that Mullen and his staff had impermissible contact with approximately 127 prospects.

The university, the head football coach, an assistant coach and NCAA enforcement staff agreed that the assistant coach and head coach had impermissible in-person contact with a prospect when they met with a prospect’s high school coach while the prospect was in the room. At that meeting, the Florida coaches expressed an interest in recruiting the prospect. Leading up to that visit, the head coach sent the prospect texts about his upcoming visit to the high school and his interest in recruiting the prospect. NCAA rules were violated because off-campus recruiting contacts are not allowed until after a football prospect’s junior year of high school. The violations were Level II.

According to the agreement, members of the coaching staff also had impermissible contact with approximately 127 prospects when seven nonscholastic football teams visited the campus and toured the football facilities on their way to a tournament in Tampa. The assistant coach had incidental impermissible contacts with several prospects. The violations were Level III.

You can see the full list of punishments handed to Florida in the announcement, but these are a few of the most notable:

Mullen has been the head coach at Florida since 2018 and most recently led the Gators to the SEC Championship game against Alabama. Florida is scheduled to play Oklahoma in the Cotton Bowl on December 30.