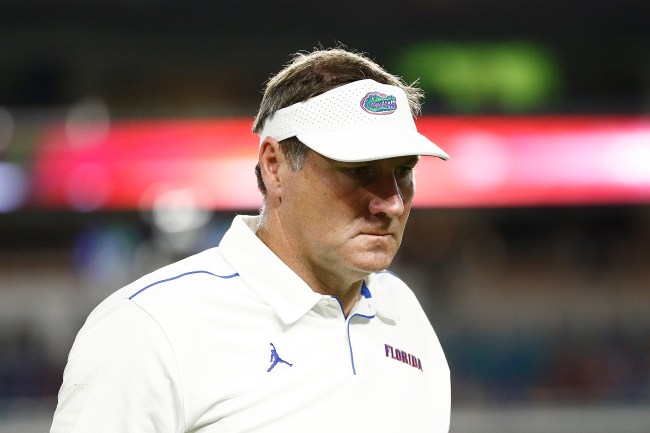 Dan Mullen has angered fans with his complaints all season long, and he did it again on Wednesday night.

After Florida got blown out by Oklahoma 55-20 at the Cotton Bowl, Mullen told the media that the real Gators team played 11 days ago and the team he put out against the Sooners was a “scout team” despite the fact that Heisman finalist Kyle Trask played in the game.

Didn’t think it was possible, but his quotes are more embarrassing than his teams play

Flordia certainly had to deal with a large number of opt-outs which included star tight end Kyle Pitts but fans didn’t think that was a good excuse for the Gators’ performance against the Sooners at the Cotton Bowl.

Florida had some opt outs, but this isn’t a case of Florida “not wanting to be there.” The Gators just got their butts kicked.

You know, Mullen and Florida could have decided not to play the game. They could have gotten out of it. But they didn’t. Mullen would have taken credit, rightfully, if his team won, so don’t suit up, get blown out and then tell everyone it doesn’t count. https://t.co/njfbvjsOmI

Dan Mullen sounds so weak. Florida should have opted out then.
Excuses are like assholes and elbows… everybody has them. https://t.co/PZeaULV0yC

Somehow Dan Mullen managed to have a more embarrassing display after the game than his team did in a 55-20 demolition. What a despicable piece of work that was from a SEC head football coach. Yikes.

Dan Mullen is doing groundbreaking work in the field of making excuses for humiliating losses. He’s like Picasso if all of his high-profile paintings sucked. https://t.co/kSaFacOVqk

I don't know what happened with Dan Mullen this year. I don't know if it's true colors, or the stresses of a year unlike any other. I'd like to give him the benefit of the doubt. But there have been some things said that will stick with me throughout his tenure with the #Gators. https://t.co/gC8JFTpInU

Why can’t Dan Mullen just hop on the podium and say: “Lincoln Riley out coached me, OU outplayed us. Congrats to them. We stunk tonight.” It’s really that simple. Stop the excuses, Florida.