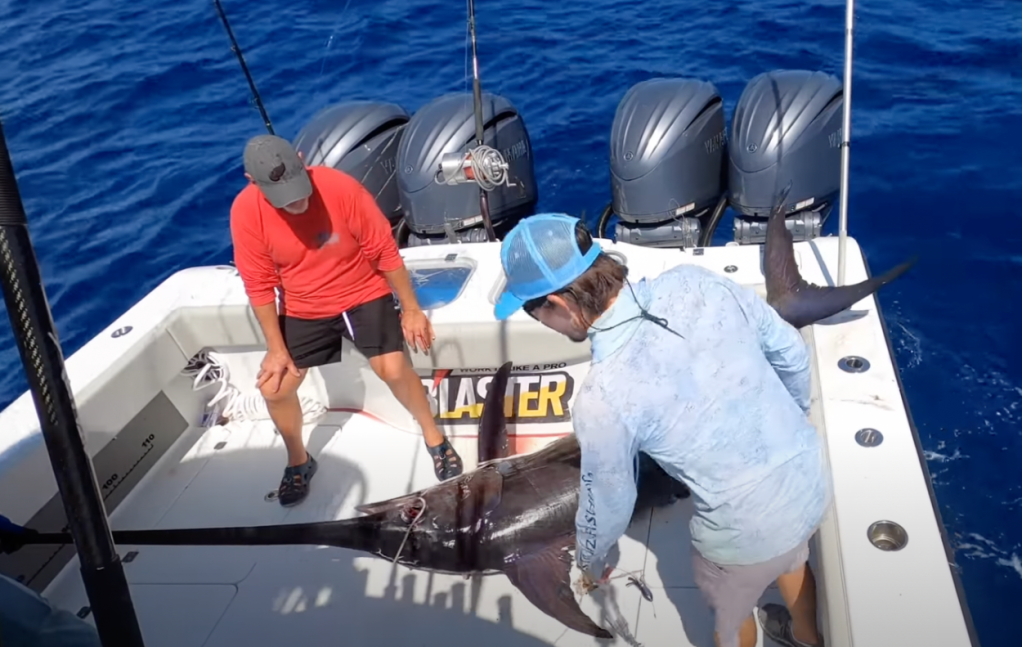 The Florida Keys offer some of if not THE best swordfish fishing on the planet. I grew up in Florida and was under the impression that the best swordfish fishing was done in The Northeast, primarily off of Rhode Island. And that might’ve historically been the case but Florida fishing guides cracked the code to catching daytime swords and it was game over, Florida won.

If you ever want to catch a swordfish in The Florida Keys, Captain Nick Stanczyk is the #1 guy you want to go fishing with. Several times he’s won the award for tagging more swordfish than any other fishing captain on the planet. He also teaches a Sword School for anyone who wants to hit The Florida Keys and learn to do it themselves.

In Captain Nick Stanczyk’s latest video uploaded to his StanzFam YouTube channel, he shared one of the stranger sights seen watching these pelagic billfish off Islamorada. The video’s on the longer side (21 minutes) but I’ve set it to start around the time they catch the fish and I’ve included additional images below.

As Nick tells it in the video’s caption, the morning was slow with only one skipjack tuna in the boat. Then the afternoon got hot and they found the beefy swordfish they were looking for. After fighting it for 25 minutes they pulled out the harpoons and gaffs but the powerful fish ripped the gaffs and dove deep again. They were able to battle it back to the boat shortly thereafter and that’s when they noticed the wound from a Cookiecutter Shark on the side of the fish (more on that below).

It’s around the 5-minute mark that they get the gaff into the fish for the first time. Then the big swordfish throws the gaffs around 5:24 and they get it back to the boat around the 7-minute mark. I’ve set the video to start around then but if you want to see it go nuts next to the boat and throw the gaffs you can scroll back 2 minutes on the video:

Cookiecutter Sharks can be found in every one of the world’s ‘major tropical and warm-temperate oceanic basins’. These sharks are found in The Florida Keys, off of the Pacific Coast of Panama, Atlantic Coast of Brazil, and over in Australia, Asia, and Africa. If the water temperature is right (64–79 °F), they might be found.

This peculiar species of shark have the strongest ‘intrinsic green luminescence’ of any shark species (glows in the dark). And they typically feed on small prey like squid, as do swordfish, so it’s pretty wild to see a Cookiecutter Shark go after a big swordfish like this.

Catching Swords In The Florida Keys

I talked about this above but seriously, if you want to catch a swordfish and check that box off on your fishing bucket list then Capt. Nick Stanczyk is the guy you need to look up. There’s a LONG waiting list for fishing charters but it doesn’t hurt to get in line. I’ve written about his swordfish fishing adventures a handful of times here on BroBible including some of his biggest catches like this one:

If you need a dang winch to get a fish inside of your boat it goes without saying that you’ve caught the fish of a lifetime. And the funny thing is, Capt. Nick seems to do that pretty regularly down in Islamorada. That fish above was a 757-pound swordfish caught three years ago, his biggest to date. But a little while before that Nick caught a ‘pumpkin’ sword that’s worth looking up too!