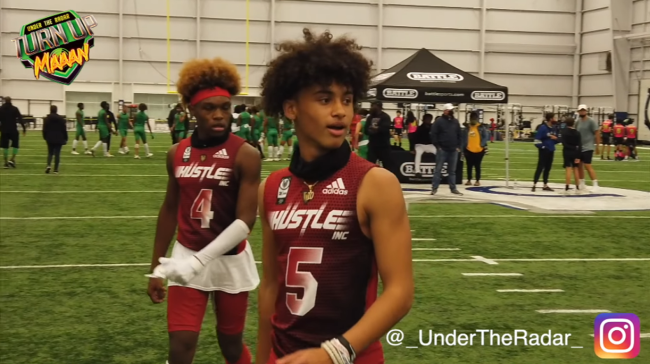 College football coaches are always trying to stay one step ahead of their competition, even if that means getting committments from football players who aren’t even in high school yet.

One such player, quarterback Julian Lewis, has been making highlight reels since he was 8-years-old and now he too has got an official offer, from the Florida Gators.

Related: 6-5, 260LB Defensive End Goes Viral Because He’s About To Be A Freshman… In High School

“It’s unreal,” Lewis said after being pulled out of second block to speak with Mullen on the phone. “So much excitement right now. I’m enjoying it.

“He told me he watched my film and he likes it a lot and he wants to start recruiting me now,” the 5-foot-11, 175 pound Lewis added.

Some of that film that Mullen watched may have been taken as far back as when Julian Lewis was just 8-years-old, playing for the Atlanta Bulldogs.

“#AGTG Blessed to receive my 1st ⭕️ffer from University of Florida‼️ #KeepWorking,” Lewis wrote on his Instagram page, which already has over 17,000 followers (again, he’s in eighth grade).

Of course, Nick Saban may have something to say about where Julian Lewis ends up playing college football. After all, we already know he isn’t above offering full scholarships to kids still in eighth grade.