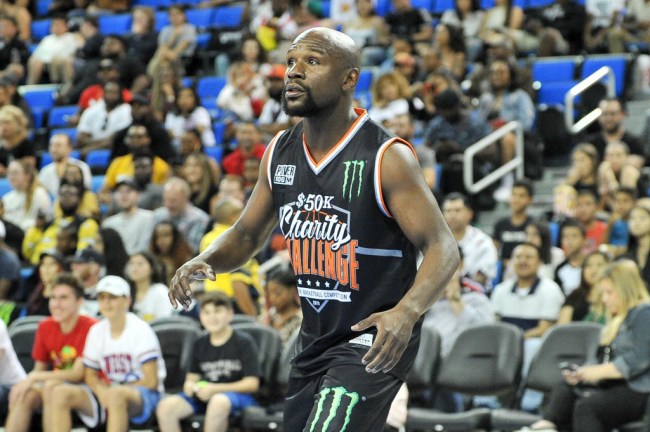 There’s no doubting Floyd Mayweather Jr. is one hell of an athlete, as you have to be a bit of a physical specimen to never lose a fight over the course of your professional boxing career—especially when you retire with 50 straight wins under your belt.

While there’s a chance we’ll see the boxer jump back into the ring (or the Octagon if Conor McGregor gets his way) at some point in the future, it appears Mayweather is perfectly content living his best life now that he’s hung up the gloves.

With that said, you can only go on absurd shopping sprees and count your giant stacks of money on your private jet so many times before you get bored so it’s important to have some other extracurricular activities to fall back on to keep you occupied.

When you consider he stands at 5′ 8″, you wouldn’t think Mayweather would be the most formidable basketball player in the world but he’s previously proved he can hold his own on the court.

On Monday night, Mayweather attempted to showcase his skills again during a charity basketball game in Los Angeles, where he found himself tasked with guarding AND1 Mixtape legend Bone Collector before falling victim to one of the more vicious crossovers I’ve ever seen.

You want some more angles? You’ve got them.

This isn’t the first time Mayweather found himself smoked like a fool on the basketball court, as he was previously at the receiving end of a stuff courtesy of model Brittney Elena.

Maybe he should just stick to boxing.