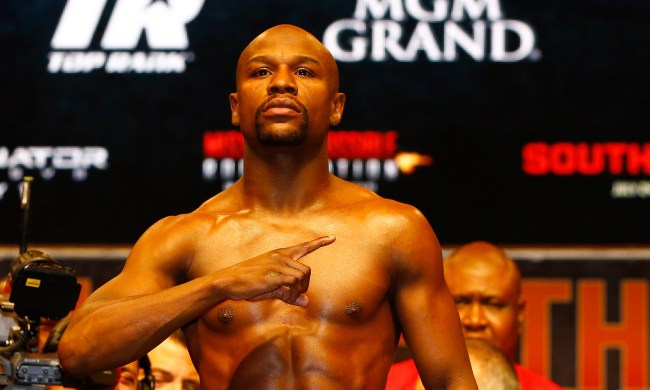 Boxing legend Floyd Mayweather is undefeated in 50 professional boxing matches and has reportdly earned in excess of $1 billion in his career.

He is also 43-years-old and hasn’t fought since he defeated Conor McGregor on August 26, 2017. Mayweather’s exhibition boxing match when he TKO’d undefeated kickboxer Tenshin Nasukawa in the first round at Rizin 14 on December 31, 2018 doesn’t count.

So, either because he’s bored, or because as his arch-nemesis 50 Cent claims, is somehow desperate for money, Mayweather is still looking for that next fight that will line his pockets with cash.

Or should I say, fights, plural? Because according to a recent report by Vegas Insider, Mayweather still wants to fight undefeated UFC Lightweight Champion Khabib Nurmagomedov, AND he also wants to double-down and give Conor McGregor another shot in the ring – on the SAME DAY.

Back in November, Mayweather was spotted at an NBA game with UFC president Dana White and then proceeded to announce that he has a “spectacular event” in the works with UFC for 2020.

That “spectacular event” is, according to Mayweather’s uncle Jeff, fighting both Khabib and McGregor in the same day, one in the afternoon, and one in the evening.

“Floyd is talking about the possibility of fighting McGregor and Khabib in the same day, which he could easily make happen,” Jeff Mayweather told Vegas Insider. “There have already been talks with Floyd and Dana White about making a deal.

“Floyd said one in the daytime and one in the night, it’ll be something that’s never been done before. Double pay-per-view, expensive ass buy,” he continued. “He’d knock Conor’s ass out early because if he knows he has a second fight coming, he’s not going to put on a show like last time. He’d beat the shit out of Conor.”

As for the all important question: Why? Jeff replied, “Why would he stay retired when he can fight UFC guys that couldn’t beat him up if he was fucking 60 years old?”

“At some point he does need to retire, but if he’s gonna be fighting guys who never really boxed, why not carry on?” he added. “He’s gotten more than these guys could ever learn, so why not take the money?”

Jeff would know. A former professional boxer himself who once held the IBO super featherweight title, recently trained none other than YouTuber KSI, so he knows a good money grab when he sees one.