Floyd Mayweather Jr. Taunts Conor McGregor For Retiring Before Agreeing To A Rematch With Him 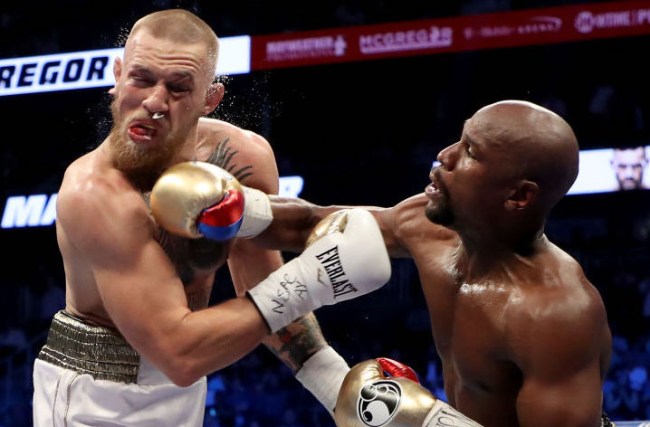 I don’t have anything against boxing and tend to enjoy watching it whenever I tune in (assuming the only thing I have to invest in order to do so is my time), but at the risk of offending diehard fans of the sport who may take exception to the analogy I’m about to use, it seems like it’s currently in the “fighting a kangaroo at a county fair in Iowa” stage of a fighter’s life cycle based on the trajectory it appears to be on right now.

I know there are people out there who will be quick to point out the potential of the current state of the heavyweight division but I can’t help but compare them to the dude trying to return his deceased Norwegian Blue to the pet store in the “Dead Parrot” sketch from Monty Python.

Sure, it was dope to watch Chonk God Andy Ruiz Jr. outdo Anthony Joshua and Deontay Wilder and Tyson Fury certainly pulled out all the stops in their rematch but you could combine all of the hype surrounding every fight to take place over the last couple of years and it probably still wouldn’t come close to that surrounding the exhibition bout between Floyd Mayweather Jr. and Conor McGregor in 2017.

Of course, the novelty of the biggest name in the UFC at the time stepping into the ring against boxing’s best active pound-for-pound fighter is what made the publicity stunt as wildly successful as it was, but at the same time, it’s unlikely Tiger Woods and  Peyton Manning facing off against Phil Mickelson and Tom Brady will go down as the most memorable golf moment of the decade when everything is said and done.

Given the piles of money basically everyone involved walked away with, it seemed only natural that the two men would face off yet again, and despite a steady stream of rumors over the past few years, nothing has come to fruition as we slowly approach the fight’s three-year anniversary.

McGregor initially angled to get Mayweather to meet him on his home turf but the boxer was understandably reluctant to step into the Octagon, which may now be even more out of the realm of possibility than it once was after the Irishman stole some of UFC 250′s thunder over the weekend by announcing he was retiring from fighting shortly after the event ended.

On Sunday, McGregor explained his rationale and said he doesn’t have any interest in the opportunities currently being presented to him by the UFC and celebrated his (third) retirement with a nice homemade cake.

That post caught the attention of the man who scored a 10th-round TKO when they squared off and he wasn’t thrilled to hear the news—especially after McGregor claimed he could beat him in a rematch less than a month ago.

It’s not entirely clear what McGregor’s definition of “fighting” is, but based on all of his comments so far, there’s no reason to believe he’s ruled out throwing hands in a non-MMA capacity, and for all we know, this marks the beginning of a carefully orchestrated plan to drum up interest in what seems to be an almost inevitable rematch.

At the end of the day, I don’t know if gimmicks like this and the rumored return of Mike Tyson will help or hurt boxing in the long run, but as an incredibly casual fan, I’m very, very here for them.