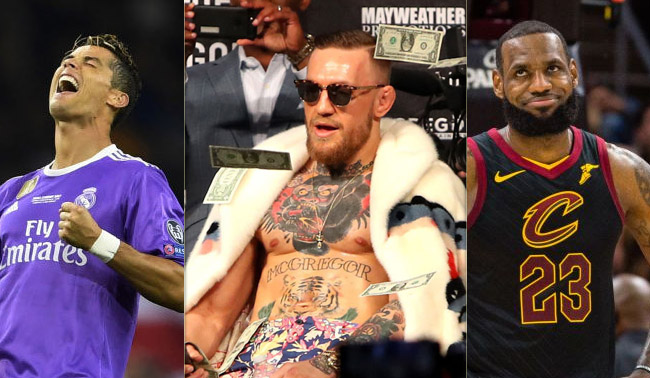 Forbes’ 2018 highest paid athletes list has been released and once again they even broke it down even further into sports like basketball, soccer, and wrestling, as well as by age, citizenship and more.

But first, let’s check out the main list of the world’s 100 highest-paid athletes.

Number one on the list in 2018 is, once again, take a wild guess, too slow, Floyd “Money” Mayweather. After taking in a cool $275 million for his boxing match against Conor McGregor, Mayweather is back on top of the list for the fourth time in seven years.

Coming in second this year is soccer legend Lionel Messi, who raked in $27 million in endorsements and $84 million in salary for a grand total of $111 million in earnings between June 1, 2017 and June 1, 2018.

Dropping back to number three after spending the last two years with the crown is Cristiano Ronaldo with a paltry $108 million in salary and endorsements in 2018.

11 different sports are represented on the list with 40 from basketball, 18 from football, 14 who play baseball, 9 soccer stars leading the way, followed by four from boxing, tennis and three from auto racing. Cricket, mixed-martial arts, and track snuck on to the list with one athlete apiece.

Athletes from 22 different countries make up the 2018 list with 66 coming from America, five from the United Kingdom, three from the Dominican Republic and Spain, and two each from Argentina, Brazil, France, Japan and Venezuela.

The average age of the top 100 is the same as 2017 at 31 even with three athletes in their 40s on the list: Phil Mickelson, Tiger Woods and Floyd Mayweather.

Giannis Antetokounmpo at age 23 is the youngest on the list, with Jordan Spieth, 24, being the only non-NBA player among the six youngest in the top 100.

The top newcomer on the list in 2018 is Derek Carr (19th, $42.1 million), while 33 other athletes actually dropped off after being on the 2017 list, including athletes like Andrew Luck, Dale Earnhardt, Jr., Jacoby Ellsbury and Wladimir Klitschko.