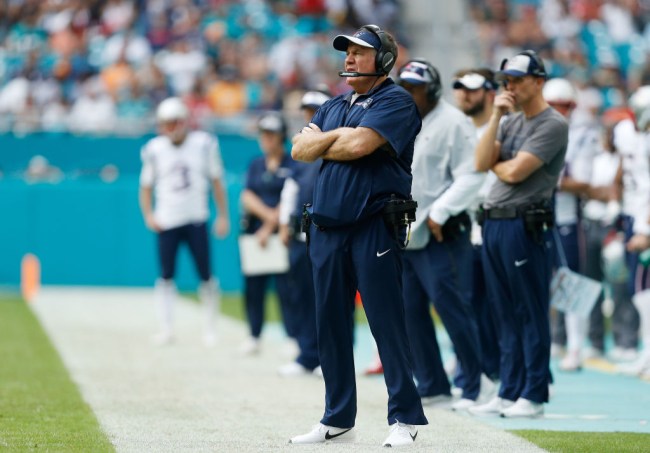 I went to take a leak during the final play of Sunday’s Patriots vs. Dolphins game. I was happy to get a W in Miami, which historically has been near impossible for the Pats in recent years and Brady’s 7-10 record in Miami is underwhelming at best. I began whistling confidently as I let my pee fly,  swirling my hips in a controlled circular motion coming dangerously close to the rim of the seat because I live life on the edge.

My girlfriend walked in as I exited the bathroom and asked “Did we win?” I replied, “We’re 10-3 baby!” As I walked back into the TV room, Gronk was stumbling to the turf and Kenyan Drake was crossing the goal line. My girlfriend, who knows nothing about football, innocently said “What happened?” I fought the urge to squeeze the life out of her. I felt the blood drain from my face. My phone began buzzing with texts reading “HAHAHA.”  I felt naked and alone.

I took comfort in the fact that ex-Patriot players agreed with my frustration with Belichick’s sloppy personnel decisions in crunch time.

“Coach Belichick outsmarted himself having Rob Gronkowski on the field for a 70-yard Hail Mary and keeping his best defensive player on the sidelines, Devin McCourty.”

“For me, I’m not used to seeing the Patriots play such sloppy football and bad situational football,” Harrison said. “This is something they practice every single day … very disappointing.”

😂😂😂 We would put Randy Moss back deep but that was in *actual Hail Mary situations. I am really puzzled by this. I think this is one of the worst calls I’ve ever seen by Belichick. Not playing Butler in the SB is probably number 1. But … at least we know BB is human.

I’m sincerely disappointed to learn Belichick is a human, and subsequently fallible. This whole time I thought he was some alien in human form. Humans … ugh! 😒

Addendum: no one should blame Gronk for that last play — zero blame. That’s LITERALLY not in his job description at all, nor does he practice tackling and angles whatsoever.

There are likely a lot more current Patriots players echoing these same sentiments outside of earshot from Bill Belichick, of course.