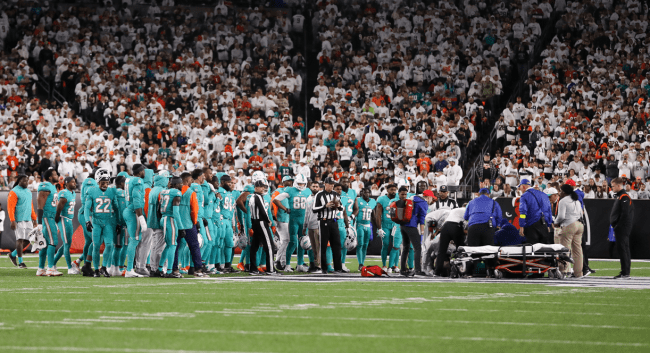 The football world has been turned upside down thanks to the frightening head injury suffered by Miami Dolphins quarterback Tua Tagovailoa Thursday night.

Scores of fans, players, coaches and medical professionals have weighed in on the circumstances surrounding the injury and almost none of it is good.

One of those players, former All-Pro offensive tackle Mitchell Schwartz, ripped the NFL Players Association for what sees as a double standard in the treatment of quarterbacks Tua Tagovailoa and Deshaun Watson.

Thursday night after Tagovailoa was taken to the hospital on a stretcher, the NFLPA tweeted, “Player health and safety is at the core of the union’s mission. Our concern tonight is for Tua and we hope for a full and speedy recovery. Our investigation into the potential protocol violation is ongoing.”

Mitchell Schwartz, who played nine seasons in the National Football League for the Browns and Chiefs, took exception to the NFLPA’s message

“We’ll fight like hell to keep QBs who sexually assault women from getting suspended for too long but when one of the good guys has concussive symptoms, returns to the game, doesn’t enter concussion protocol, and is allowed to play 4 days later, ‘our investigation is ongoing,'” Schwartz, a four-time All-Pro tweeted back at the NFLPA.

“And look, miss me with the ‘but the doctors said it was his back!’ ‘Doctors OK’d him!’ He banged his head on the ground, got up, grabbed his head and shook it side to side, then stumbled around and couldn’t walk,” the Super Bowl LIV champion continued. “MAYBE, JUST MAYBE, put him in concussion protocol for the week?!?”

Prior to the NFLPA’s statement, Schwartz had already tweeted, “I really really hope nothing last week was a risk factor for this week. And my guess is it 100% was. Like he freaking staggered and fell down multiple times while walking. How that doesn’t take you out of the game, let alone put you into protocol for the next week, I have no clue. Feel so bad for Tua, supposed to be regulations to protect from this.”

He’s not wrong there. There are supposed to be regulations to protect players from what happened to Tagovailoa Thursday night.

The NFLPA had opened up an investigation into the concussion protocol on the Miami sidelines after Sunday’s game based on how wobbly he looked during that game.

Now it looks like the NFLPA needs to open up an investigation of their investigation because as Baltimore Ravens coach John Harbaugh said on Friday, echoing thousands of others, “I couldn’t believe what I saw.”