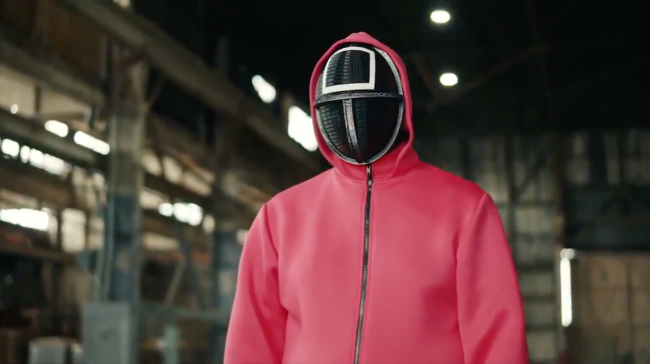 Unless you have been living in complete solitude without technology, then you have heard about the hit Netflix show ‘Squid Game.’ The show, which was initially rejected for a decade, is shot and filmed entirely in Korean and has exploded in popularity.

The sale of white vans have increased SUBSTANTIALLY because of Squid Game and it’s all anyone is talking about.

In the show, hundreds of financially-strapped contestants accept an invitation to compete in children’s games for a big cash prize. What they didn’t know is that the players who are eliminated get shot and killed.

Amidst the commotion surrounding Squid Game, Fox NFL Sunday created an NFL-themed parody of the plot. Shoutout to producer Jason Palmer and my friend Nicole Simeone for putting it together, because it’s awesome. The internet has been buzzing about the skit all morning.

In ‘Squad Game,’ the concept is simple. Instead of being strapped for cash, the contestants — different NFL franchises — are strapped for wins.

Thus, over the course of the upcoming ‘Squad Games’ — the upcoming games in the NFL regular season — contestants will be eliminated. Not killed, but eliminated from playoff contention.

Take a look at the skit that took the internet by storm on Sunday morning:

"You are all here because your teams have completed 4 weeks of games with disastrous results… Saints, you lost to the Giants, that counts as like 2 losses."

It's time for a peak at the new hit show, "Squad Game" 👀 pic.twitter.com/C7mwGuUtVa

The entire thing is tremendous, and the costuming is excellent, but the reference to Jim Mora’s “PLAYOFFS?!” rant is the best part. It’s just subtle enough to go under the radar if you aren’t careful and it’s brilliant.

Fox NFL Sunday continues to be the best pregame show on television and it’s no wonder why. Shoutout to the homies!