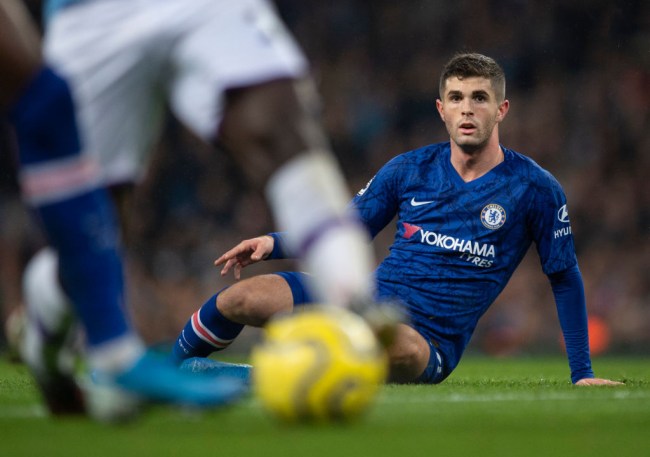 Chelsea winger and already the greatest American soccer player to ever live, Christian Pulisic, has been beyond impressive during his first season in the Premier League. The 21-year-old has scored 10 goals and added five assists this season helping Chelsea jump into a Champions League position and into the FA Cup Final along the way.

Apart from picking up a few minor injuries throughout the season, Pulisic’s debut campaign in the Prem has been absolutely flawless and Wednesday’s performance against title-winning Liverpool showed the world yet again that the kid from Hershey, PA is the real deal.

Related: Christian Pulisic Scores His First Goals For Chelsea With Hat Trick And It Was A Thing Of Beauty

After picking up a knock against Norwich earlier in the month, Pulisic missed a couple of matches but came on in the second half against Liverpool and singlehandedly brought his side back into the game already trailing 4-1.

In the 61st minute, Pulisic decided to split three Liverpool defenders before delivering a perfect ball to Tammy Abraham.

Then, just 12 minutes later, Pulisic brought down a cross off of his chest, settled the ball to his right side, and fired a rocket into the top corner to make it a 4-3 contest.

🇺🇸🔥🙌 Christian Pulisic scores an amazing goal to make it 4-3. #USMNT star comes on with Chelsea 4-1 down, has an incredible assist and then scores this beauty.

Ultimately, Liverpool would go on to win 5-3, but yet again it was the American winger that stood out in the match.

Since Pulisic has turned things up a few notches over the past few months, Chelsea and soccer fans in general can’t help but draw comparisons to Pulisic’s game and statistics to Eden Hazard’s when he was at Chelsea. Following the match against Liverpool, Frank Lampard was asked about the comparisons between Hazard and Pulisic and Lampard had nothing but high praise for the American.

“Christian has had his moments of that but mid-season he had a really good patch and then since restart he has been in incredible form. Only the injury he picked up in the Norwich game has kept him out of the semi-final when he’s flying. Against Liverpool he came on and played 40 minutes which is great for feeling confident about the injury and the qualities he has been showing.”

“He is so young and he has such natural talent and he creates goals and scores goals, Lampard added.

“He is a big player for us so I’m delighted to see him come through fit.”

Christian Pulisic is getting a lot of comparisons to Eden Hazard.

Pulisic's 0.74 G/A per 90 this season would be enough for the 2nd best season for Hazard in his 7 seasons at Chelsea.

There are certainly worse players Pulisic could be compared with. Hazard made the move to Real Madrid for a reported £400,000 per week salary in June of 2019 after scoring 85 goals in 245 appearances for Chelsea.

The future is mighty bright for Pulisic and, hopefully, the United States national team.