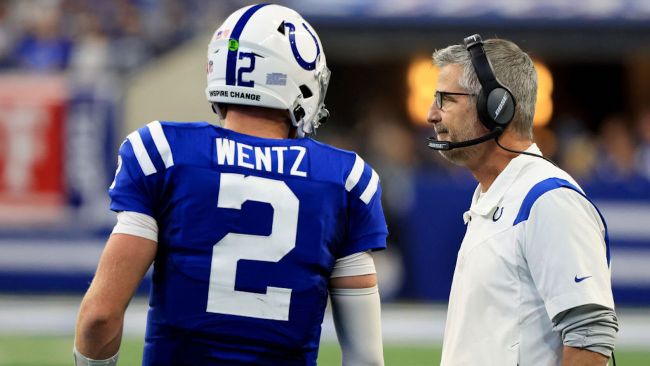 The Carson Wentz experiment in Indianapolis lasted just one season as the Colts traded the former #2 overall pick to the Washington Commanders on Wednesday, March 10. The Colts had previously traded for Wentz back in March 2021, as they sent a first-round and third-round pick to the Philadelphia Eagles in exchange for the QB.

According to a new report from The Athletic, following the disappointing end to the Colts’ 2021-22 season — which saw them lose to the dismal Jacksonville Jaguars on the final day of the season, ultimately costing them a playoff berth — Colts head coach Frank Reich reportedly apologized to team owner Jim Irsay for placing his trust, and the team’s draft capital, into Wentz.

According to an article from The Athletic’s Zak Keefer, after the 2021 season, Reich personally apologized to Irsay for thinking he could fix Wentz. Here’s the relevant section of the article:

Reich, who originally pushed for the trade to acquire Wentz last winter, apologized to Irsay after the season, according to a source. The coach believed he could resurrect Wentz’s stalled career and solve the Colts’ quarterback conundrum.

“I stuck my neck out for him last year,” Reich admitted earlier this month. [via The Big Lead]

Despite Wentz’s subpar season, the AFC South club was still able to get some return on their investment as they were able to ship the 29-year-old signal-caller to the Washington Commanders for a second-round pick and two third-round picks.

With Wentz now only his third team in less than a year, his career as a starting quarterback in the NFL is likely on life support.

RELATED: ESPN Analyst And Commanders Fan Matthew Berry Tries Desperately To Convince Himself That Carson Wentz Is The Answer In Washington