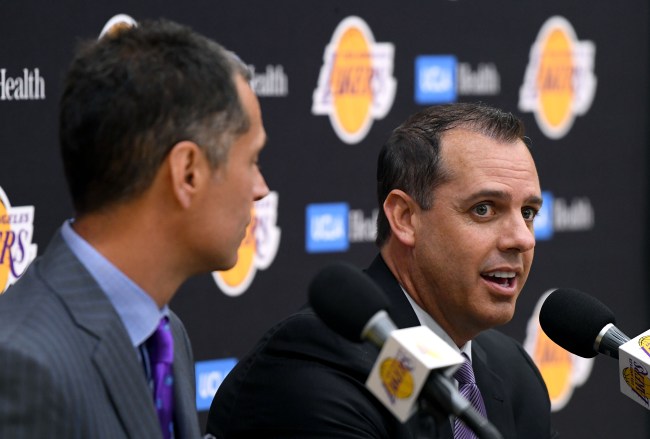 After firing Luke Walton last month the Lakers went on an exhaustive coaching search and interviewed several candidates for the job.

So far, Monty Williams, Ty Lue, Juwan Howard, and now Jason Kidd have interviewed to be the Lakers head coach.

Eventually, the team’s top two choices Monty Williams and Ty Lue decided not to take the job and former Pacers coach Frank Vogel entered the fray and was signed by the team.

Frank Vogel has agreed to a deal to become the next coach of the Los Angeles Lakers, league sources tell ESPN.

Today Vogel was introduced as the Lakers head coach and in the press conference one reporter had the gall to ask Rob Pelinka about the team’s coaching search before “settling on Frank”.

Bruh the amount of disrespect in this question 😂😂😂😂 #Lakers @WorldWideWob pic.twitter.com/Wl80hcwtZC

“Before you SETTLED on Frank”! 💀 https://t.co/IWzVPxKp0K

“Settled on frank” in front of his face, Jesus Christ 🤣🤣🤣 https://t.co/MysEYuR4J4