Intentional Or Not, Frank Vogel’s Quote About LeBron James Not Showing Up To Lakers Games Is Creating Some Controversy 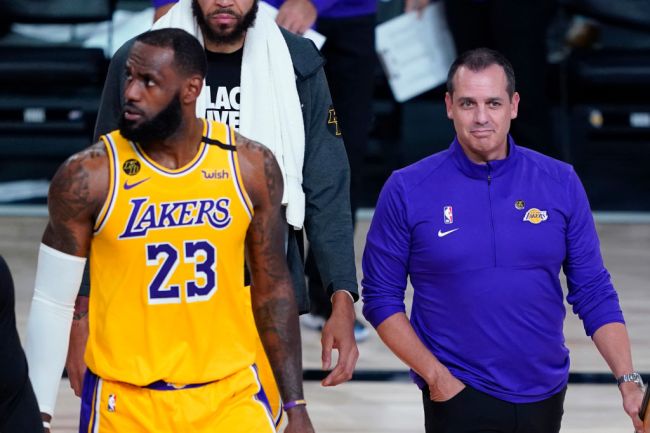 LeBron James has been sidelined with an ankle injury for quite some time now, so it makes sense that he hasn’t been in attendance for each of the last two Lakers’ games. Well, it would make sense if the injury was the reason he wasn’t showing up to games, but according to Los Angeles head coach Frank Vogel, that isn’t necessarily the case.

After James was a no-show during the Lakers’ win over the Nuggets on Monday and again during their loss to the Clippers on Thursday, Vogel was asked whether or not James’ absence was due to a medical reason. Vogel simply answered “no” before saying James is “just not here.”

According to a source, however, James’ absence was excused by the team so he could “stay off the ankle,” which sounds a lot like a medical reason to me. So, what’s going on here?

LeBron James' absences from the Nuggets and Clippers games were considered excused by the Lakers to allow James time to "stay off the ankle," a source with knowledge of the situation tells ESPN. https://t.co/b23YxZGmWL

It should go without saying that it’s very odd that Vogel said James taking time away from the team had nothing to do with his injury, while another source, one reliable enough that ESPN trusts to run the information, says it has everything to do with the ankle.

The Lakers have lost seven of their last nine games and struggled mightily throughout the month of April, a month when James suited up for just one game. Given the team’s struggles, one would imagine James would be on the bench cheering his guys on as the Lakers are all of the sudden in the six-seed in the Western Conference.

Maybe James is just wanting to spend more time with his family and heal the ankle – which is fine – or maybe he’s sitting at home on Twitter or sulking over the fact that the Lakers may have to participate in the NBA’s play-in tournament.

Regardless of whatever is going on with James, Vogel should probably get the story straight.