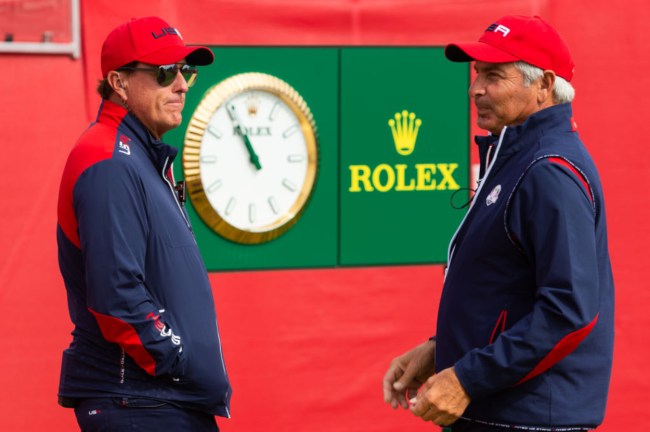 When you think of Fred Couples you don’t necessarily think about a very outspoken, vocal guy. Couples is known as one of the more laid back, smooth-swinging golfers of all time, but not even he can sit back and watch what’s happening with LIV Golf without sharing his own bold opinion.

Couples specifically took aim at Phil Mickelson. The two vice-captained the U.S. Ryder Cup-winning team a year ago and have been a part of other cup teams together in the past, but it’s clear that friendship is no longer.

Couples doesn’t think the two will ever talk again.

“I don’t think I’ll ever talk to him again,” Couples told GOLF. “What for? I’m not in the same boat as him anymore, and probably never will play golf with him again. I’m not saying that to be mean. We’re just in different orbits.”

That’s fair from Couples. Mickelson has joined LIV Golf and Couples has planted his flag with the PGA Tour and PGA Tour Champions.

He wasn’t done sharing his take on “stupid” Mickelson and all of LIV Golf, however.

“These guys – you’ve seen their interviews, right?” Couples explained. “Have you ever seen Phil look so stupid in his life? They know it’s a joke. They’re all saying they want to change golf, they’re doing it for the better of golf.

“No one has said, ‘Hey, when I look back 50 years from now… we’ll have made this tour [what it is].’ No one has said that. You know why? Because they’re not going to be around in three years.”

Again, Couples opinion here is fair. Nobody knows how long LIV Golf will actually operate. The Saudis have unlimited funds and haven’t entered this game to turn a profit. At the end of the day, this battle between LIV and the PGA Tour will go to court sooner rather than later.

Then you have the fact that the Saudis could wake up one day and say ‘alright, this golf thing isn’t working,’ and they take their money elsewhere. That sounds ridiculous, but with the funds and the power those funds bring, that’s a very real scenario.