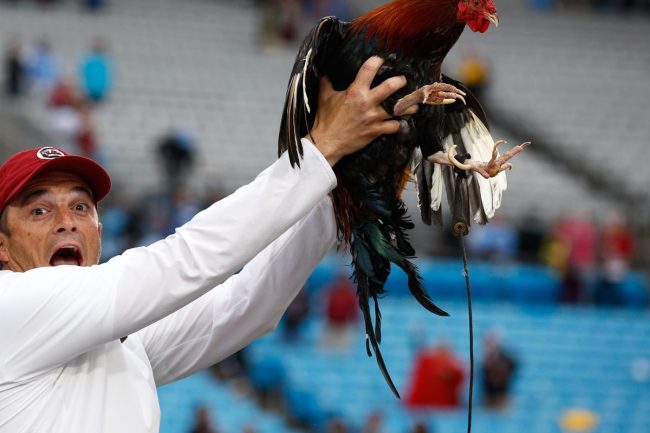 South Carolina has chosen a new name for its live Gamecock mascot. The bird previously known as “Sir Big Spur” will now be called “The General.”

The new moniker references General Thomas Sumter, from whom the university’s nickname originates. The American Revolutionary war hero was deemed “The Gamecock” due to his fierce fighting style against his British counterparts.

The school was forced to rename the live mascot due to some bickering between the old and new owners of the rooster. After that news was announced, South Carolina came up with a list of potential nicknames to vote on.

“Cock Commander” appeared to gain the most steam, and the term even trended on Twitter for 24 hours after the vote went public. But it appears that despite being the leading vote getter, the school went a different route.

Fans were certainly disappointed to see “Cock Commander” go, though “The General” may be a bit more TV and radio friendly. Still, I can already see the never-ending insurance company jokes. Maybe the school can work in some sort of promotion with Shaq as a result.

With the university now announcing the Gamecocks’ new mascot name, folks are posting their reactions on social media.

As mentioned, most are sad to see “Cock Commander” overruled.

This is a true abdication of democracy

He absolutely will not be known as that. https://t.co/wLrIeRTkBZ

This was probably the right decision, but it doesn't make me any less disappointed. https://t.co/5pDsEPii3h

A sad day for South Carolina fans everywhere. It looks as though they’ve taken their first loss of the college football season.