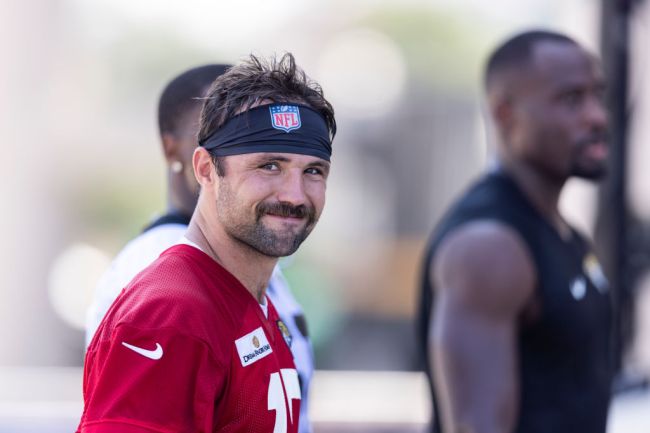 Gardner Minshew wants revenge on his new head coach. The 25-year-old NFL quarterback and folk legend spoke with the media for the first time since being traded to Philadelphia and told a hilarious story from 2019.

The tale came from his most meaningful interaction with Eagles head coach Nick Sirianni.

Minshew visited the Indianapolis Colts during the pre-draft process in 2019, where Sirianni was the offensive coordinator at the time. The two got to talking and the latter challenged the former to a game of H-O-R-S-E.

Things started getting competitive between the two. Perhaps a little bit too competitive, Minshew jokes.

Minshew, who was wearing a button down, decided to take off his shirt. It didn’t help, he earned all five letters, and Sirianni won.

Now, after reuniting with his former basketball opponent in Pennsylvania, Minshew is out for revenge.

“I’m back for revenge.” Gardner Minshew on how a game of H-O-R-S-E with Nick Sirianni left an impression. pic.twitter.com/wvGv6A7klD

Sirianni has gained quite the rapport for being overly competitive. Eagles defensive coordinator Jonathan Gannon even went so far as to call him “exhaustingly competitive.”

Whether it’s H-O-R-S-E, or chess, or blackjack, or rock-paper-scissors, Sirianni is going all-out. With Minshew calling him out, the stakes are only going to be higher for the rematch.

Although the showdown on the basketball court might be the most time they’ve spent together until now, Minshew and Sirianni are about to get very close. Minshew might only be the third-string quarterback in Indianapolis when the final roster is set, but his laidback, fun-having personality is about to be a prominent voice in that locker room.

Surely, after Minshew’s comments, the rematch is imminent. Can we get a live stream?