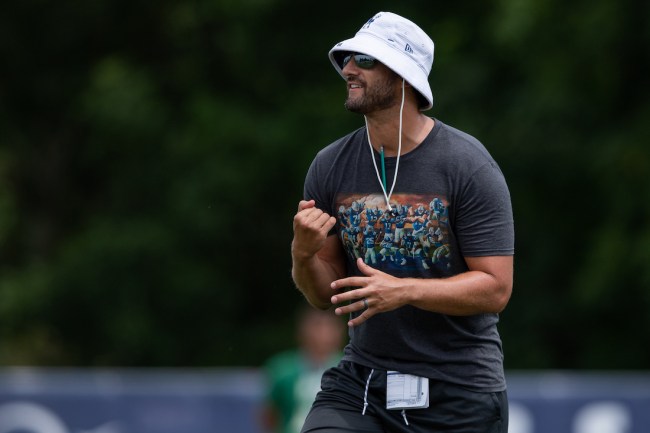 If there’s one thing Nick Sirianni’s doing as the Philadelphia Eagles’ head coach, it’s doing things his own way. While there was some harsh criticism of the 39-year-old after the Eagles hired him back in January — with one anonymous source secretly slamming him for being “not super smart,” according to the Philadelphia Inquirer‘s Jeff McLane — the dude doesn’t seem too fazed by any of it.

With the NFL Draft coming up and every team around the league looking for ways to differentiate how they evaluate prospects, Sirianni is adding his own unique strategy into the mix. And because these pre-draft meetings aren’t being done face-to-face due to the pandemic — and instead are being held over Zoom — the Eagles head coach figured he’d test the competitiveness of a player by challenging him to a game of Rock, Paper, Scissors.

“I think some of you guys are wondering. We didn’t go earth shattering on these games,” Sirianni said. “I played a couple of them in rock-paper-scissors. Right? It was as easy as that. Rock, paper, scissors. Let’s see how competitive you are. I’m competitive. I’m going to be talking trash to them. Did you talk trash back to me? Jeopardy. There’s different ways to do it. It looks a lot of different ways, but our coaches got so creative with this.”

"When you compete with someone that's competitive, they're gonna go at you no matter what game you're playing."pic.twitter.com/iMUIny1X0o

This is either the most genius or the most bizarre thing an NFL coach has ever done to evaluate the psyche and competitiveness of an NFL Draft prospect. For some reason, though, I absolutely love the move by Nick Sirianni, who doesn’t seem to care that the Eagles will be investing millions into a batch of new players soon — so long as the guy showed a cutthroat attitude during a game of Rock, Paper, Scissors.

Once news hit social media of the Philadelphia Eagles’ head coach evaluating players this way, there were plenty of people more than happy to rip the idea. Take a look below at some reactions.

Wow so thankful joe judge is my coach

Look, the idea of playing Rock, Paper, Scissors during a job interview is a little strange. But if Nick Sirianni and the Eagles choose the right players during the NFL Draft and can turn things around in the next couple seasons, maybe it’s a method more NFL franchises will incorporate into their interview process before the draft?