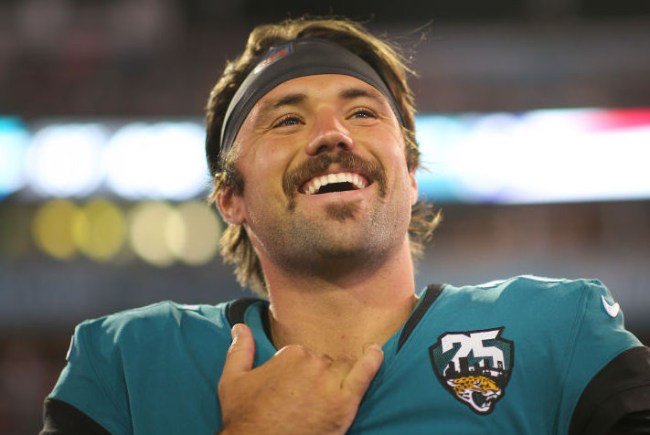 I’ll admit that I had no clue who Gardner Minshew was when he was picked up by the Jacksonville Jaguars in the sixth round of the NFL Draft last year because I’m not a diehard fan of Washington State’s football program but it didn’t take long for the quarterback to become one of my favorite players in the league.

Minshew actually started his college football career at East Carolina, where he was initially planning on redshirting in order to succeed the two senior quarterbacks on the roster. However, his plan hit a bit of a snag when one of those players became the team’s running back and the other was sidelined with a concussion, meaning he was in a position to use up a year of eligibility when he suddenly found himself starting.

After realizing the only way out of the situation was to obtain a medical waiver, he did what anyone in his position would do: pound some Jack Daniels and try to break his had with a hammer (although he was ultimately unable to achieve his goal).

Minshew also has a fairly unconventional strategy while preparing for games that includes throwing on a pair of sunglasses and a headband and stretching wearing nothing but a jockstrap (although sometimes he doesn’t even bother with that last item). However, you can’t talk about his legend without discussing what I assume is the source of all of his power: his mustache.

When Minshew burst onto the scene, tons of people drew a comparison between Minshew and Uncle Rico from Napolean Dynamite (although I wouldn’t be shocked if the Jaguar was actually capable of throwing a football over them mountains) and the two men actually met up last season.

So they're not the same person…🤔 pic.twitter.com/VAzOVzFRbh

However, I regret to inform you that his iconic look is (at least temporarily) no more, as Minshew has joined so many others by hopping on the quarantine beard train and now looks less like Burt Reynolds in Smokey and the Bandit and more like the lead singer in an indie rock band that plays shows (remember those?) in 200-person venues.

Gardner Minshew has gone from the stache to a full beard! pic.twitter.com/Fq2hWZk8iJ

I’m not necessarily saying I hate the “skinny Haley Joel Osment” aesthetic he has going right now but I can only hope he brings out the razor before the season starts.