Gardner Minshew Is Unclaimed In His Own Fantasy Football League, And He’s In First Place 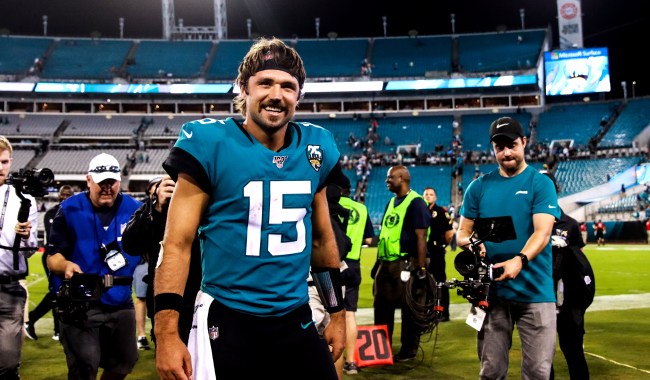 No matter what happens from here on out, Jacksonville Jaguars quarterback Gardner Minshew II has already won at life.

The Jags’ 2019 sixth round pick out of Washington State, via East Carolina, has already done more than anyone outside of his immediate family and friends could have ever expected in relief of an injured Nick Foles.

He’s 2-2 as a starter with wins over Denevr and Tennessee. He’s completed an impressive 66.7 percent of his passes. He has a ridiculously good touchdown to interception ratio of 9-to-1.

The Jaguars are offering special ticket packages focused around him. He’s got fans growing mustaches so they can look like him. He’s met Uncle Rico.

He’s also been dubbed the “Jock Strap King” by teammate Leonard Fournette for his “unique” predilection for exercising in just a jock strap.

Hey, if you're going to be king of something, it might as well be a jock strap. https://t.co/MswBdu69h9

If Minshew can somehow keep all of this up he is going to earn himself one hell of a big payday when his 4-year, $2.7 million deal with the Jaguars expires.

Oh yeah, he’s also kicking ass in his fantasy football league this year, because at this point why wouldn’t he? Even if he is still a free agent in his own league.

In a massive profile on the surprising rise of the NFL’s new hero, ESPN’s Sam Borden got the scoop from one of Mishew’s buddies.

Minshew doesn’t have a good explanation for his mental acuity; football plays, and football players, just unspool in his mind. It happens in fantasy sports too: Tre Polk, who is one of Minshew’s closest friends from Brandon, says Minshew stunned their dynasty league this past summer when he opted to redraft nearly his entire team (which is named Trust the Process) and start from scratch.

“It was ridiculous,” Polk says. “He must have known something about Melvin Gordon, and he worked out with Josh Jacobs and liked what he saw so he took him, and he took the Patriots defense, and he grabbed Austin Ekeler …” Polk goes on for a few minutes like this before putting on the bow. “Bottom line: He redrafted, like, his whole team, and he’s tied for first place. He just sees the game in a different way.”

I ask the obvious follow-up: Who is Minshew’s quarterback?

“That’s the thing,” Polk says. “I keep waiting for him to pick himself up, but no one took him. Gardner Minshew is available in Gardner Minshew’s fantasy league.”

Of course he did.