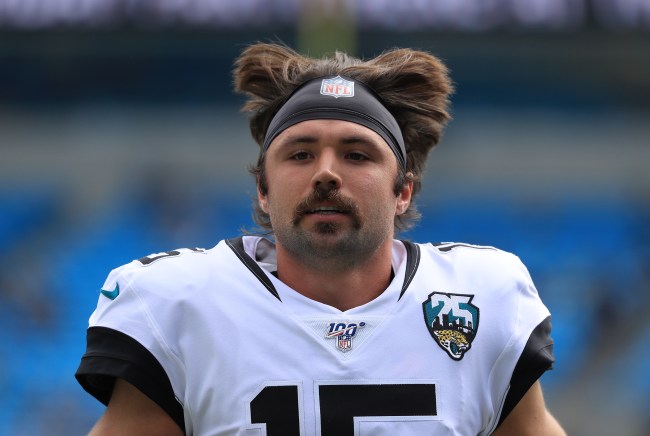 Gardner Minshew II burst onto the NFL scene in a way that’s hard to compare to his peers. He was thrust into the role of starting QB for the Jacksonville Jaguars after Nick Foles was placed on the Injured Reserve list with a broken left clavicle.

Very quickly, crazy stories about Gardner Minshew’s began to roll in, stories ranging from how he was playing Cornhole when the Jags drafted him, how his career pass percentage was sitting at 69.420% for days, and how he’s been dubbed the ‘Jock Strap King’ based on his bizarre locker room habits. For real, though, this Jock Strap King shirt is LEGIT.

It was Leonard Fournette who dubbed Minshew the ‘Jock Strap King’, claiming that Gardner’s mustache possesses magical powers. Jags fans are now buying into this theory and many are attempting to emulate the ‘Fu Minshew’ mustache that’s part of his iconic look.

As a guy, I fully understand this craze. It’s a great look. Unfortunately, the ladies aren’t on board, at least not according to the feedback in an article on the Wall Street Journal about diehard Jags fans facing blowback from the ladies in their lives over these mustachios.

Droves are trying to emulate the Fu Minshew, to the horror of another group: their loved ones. Mr. Daufenbach has been growing his for a month against the express wishes of his girlfriend, Mia Billings. “I don’t want him to have a mustache,” said Ms. Billings. “He’s not even a Jaguars fan.”

“She’s not appreciating the beauty of the ’stache,” Mr. Daufenbach says.

His wife is wrong. The stache is great.

Gardner’s siding with the ladies on this one. He says there are some trash staches out there at the moment and the dudes need to step up their game.

One person in particular agrees with naysayers like Ms. Billings. His name is Gardner Minshew. “There’s a lot of bad mustaches out there right now,” he says. “But hopefully we’ll get them right.”

The ladies are legitimately pissed. And I think this might actually only fuel the Jags fans desire to grow out these Fu Minshew mustaches. Here’s another excerpt from the WSJ article:

Amy Ekdahl remembers exactly how she learned that her husband had joined the craze, and she wasn’t happy about it. John Ekdahl has had a thick beard for as long as they’ve been together. He decided to get rid of all of it—except the mustache—after Mr. Minshew led Jacksonville to a win over the Tennessee Titans. He didn’t consult his wife.
Ms. Ekdahl learned about it when she checked her phone and saw he had sent her a picture. “My heart dropped,” she recalls. “I was enraged all day.”
Her friends at work expressed similar shock and asked her how old her husband is. “Too old to be doing this,” she told them. (via)

Another fan, Jordan Zebouni, grew one out and his wife hated him for it. He swore he’d shave his beard off and mold it into a Fu Minshew if the Jags won one of their first two games. They did and he rocked the ‘stache until his wife made him shave it off for their wedding day.

Jason Brown, another fan who grew out the Fu Minshew, is a professor at Valdosta State University in Georgia and he says students have been hitting him with compliments since he grew out the mustache but his wife hates it:

Megan Brown, his wife, felt differently. She was concerned it wasn’t growing in evenly and, more worryingly, thought it made him look like a biker. “That’s not my sweet husband,” she thought. The mustache lasted only a week and a half before he caved. (via)

By the way, the resemblance is uncanny (un-Candy?) here. The hair is spot on: 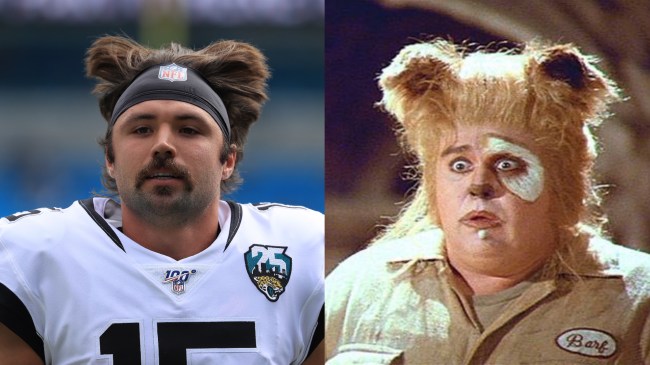 Ladies, the football season is only 16 weeks long + the playoffs. Can’t you just let them have this one? If your Jags fan husband/boyfriend is really rocking a mustache that’s horrendous, isn’t this a little bit your fault for dating someone without any self-awareness? That mustache was always there in spirit, it just took Gardner Minshew II to bring it out.

MAKE SURE to check out this ‘Jock Strap King’ t-shirt tribute to the growing legend: 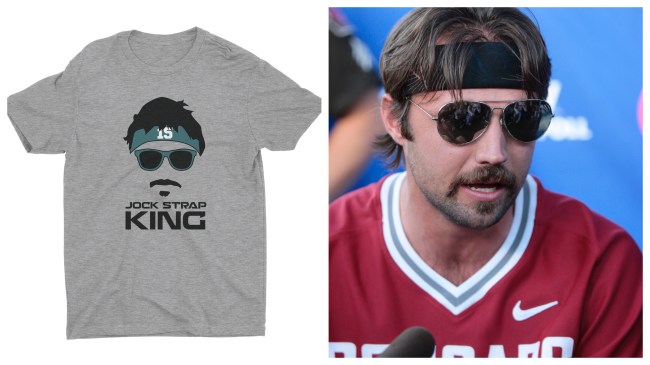 You can pick up that shirt right here before it’s gone.

If you want to see photographs of these horrendous Fu Minshew mustaches you can click here to visit the Wall Street Journal.