Gardner Minshew’s Career NFL Completion Percentage Is A Nice 69%, So Twitter Had Some Fun With The News 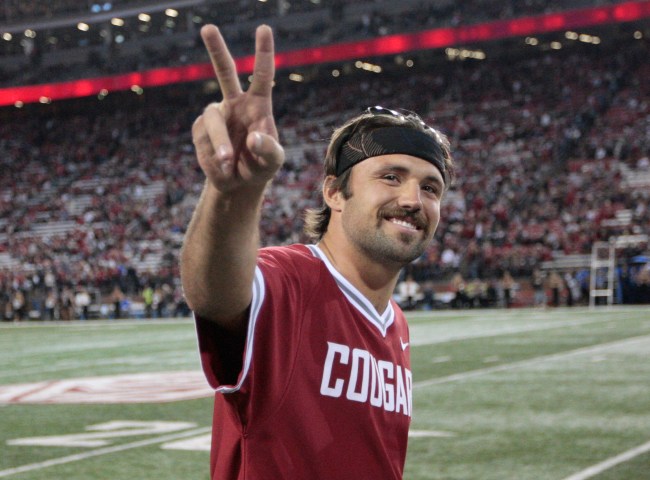 Gardner Minshew’s the man; and he’s proving it with his play on the field early in his pro career. After falling in the NFL Draft and being selected by the Jacksonville Jaguars in the sixth round, the former Washington State quarterback has taken over the league, leading his Jags to victories in the past two games and grabbing headlines because of his ever-growing legacy.

From stretching nearly naked in the locker room to gaining respect from his NFL teammates for his swag and XXX-style stache, it seems like everyone’s got Gardner Minshew mania. That includes an adult entertainment brand, which offered the mustachioed quarterback a $1 million endorsement deal a few weeks back. Ah, yeah, it’s good to be Minshew right now.

Want to know something else that’s almost too perfect? After looking at the Jags’ quarterback’s career stats — albeit in limited action — his completion percentage is a very nice 69 percent. Guys, this type of shit can’t be made up.

Although the tweet above claims Gardner Minshew has a 69.420 completion percentage, it’s a little too good to be true. With 84 completions in 121 attempts, technically it’s at 69.421, but, damn, how close is this to perfection?

Following the incredible revelation, Twitter had lots of fun reactions; so take a look below at some of what people on social media had to say.

Not all hero’s wear capes

You underestimate the Stache’s ability to maintain this pace.

Obviously, it’s not like Gardner Minshew’s just sitting around and purposely made this happen, but… actually, who the hell knows if he has or not? The dude has such a hilarious personality that it probably wouldn’t surprise any of us if he schemed this up just for the laughs. If he goes out and keeps this up the entire season, we’ll have our answer — and here’s to hoping he does just that, because this is one of those stories that should be made into a 30 for 30 if it lasts all season long.