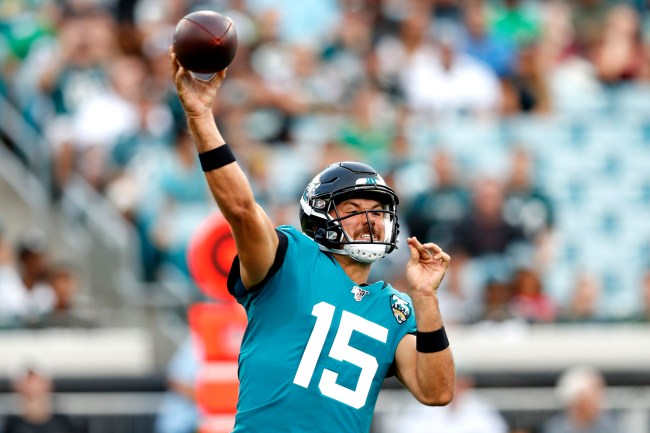 Jacksonville Jaguars newly-minted starting quarterback Gardner Minshew (RIP Nick Foles’ clavicle) is the living manifestation of Uncle Rico if he hadn’t blew out his shoulder in ’68 or if coach had ever put him in the fucking game.

The rookie out of Washington State was a silver lining in the Jags 40-26 home loss against the very good Chiefs, finishing the game 22 for 25 with 275 yards, two touchdowns, and an interception.

Yeah those are just stats that reflect throws and catches. His real value is what he does in the locker room–doing band exercises with shades on and his wang out.

The former Pac-12 Offensive Player of the Year is also a football genius–measured in his score of 42 on the Wonderlic test prior to the NFL Draft, the highest of all prospects. For perspective, one of the highest Wonderlics of all time was the Harvard nerd himself Ryan Fitzpatrick, with a score of 48. Tom Brady’s was 33.

Reporters asked Minshew about his high score in comparison to teammate and fellow QB Joshua Dobbs, who holds a degree in aerospace engineering from Tennessee, along with a perfect 4.0 GPA, and in 2017, was awarded the Torchbearer Award, the highest honor for an undergraduate student. Dobbs’ Wonderlic was a measly 29.

Jaguars QB Gardner Minshew, who scored a 42 on the Wonderlic, says he doesn’t consider himself in the same league as new backup Josh Dobbs, who graduated from Tennessee with a degree in aerospace engineering. So where does he belong? pic.twitter.com/SULlOTcYyE

Jesus, dude. If you didn’t make the NFL, what job could a Communications degree possibly get you? A job as a blogger? Like a LOSER. Sad.

Can Gardner Minshew do any wrong? Answer: just wait until he throws three picks in a loss, and then these “civilized” people will. eat. him.